so, i updated to this firmware and the screensaver activates after 60 seconds even if there is activity at the inputs… surely this isn’t right/intended?

It’s working as intended, since a lot of the UI is static. We’ll talk to VPME to see if it could be implemented differently.

Here’s a download link (mac) that includes v1.2 if you want to rollback:
https://intellijel.com/downloads/firmware/Intellijel%20Firmware%20Updater%20macOS%2020191122.zip

ah i see. right on, thanks!

It would be nice if you could set the screensaver to something longer than 60 sec. - such as 5 minutes, or even 30 minutes… maybe if there was a preference in the menus. Great idea to save the display - but the workflow for analyzing a patch now means I’m clicking that encoder every minute

I don’t have a zero currently but was curious about if it has a specific feature. I find it hard to get analog clock sources to sync up correctly to a specific bpm for recording into a DAW, so I was wondering if there is a way to measure beats per minute using the zero scope.

I have tried two different micro usb cables connected to my PC but nothing happens. Do I need to have the Zeroscope powered by my eurorack rig AND connect via usb to my PC in order to update the firmware? I don’t see anything in the manual about how to do this (unless I missed it somewhere). Also, the firmware updater readme says that you need to put the unit into bootloader mode… but again, I don’t see any documentation on how to do this. Thanks for the help.

The instructions are in the firmware updater app. 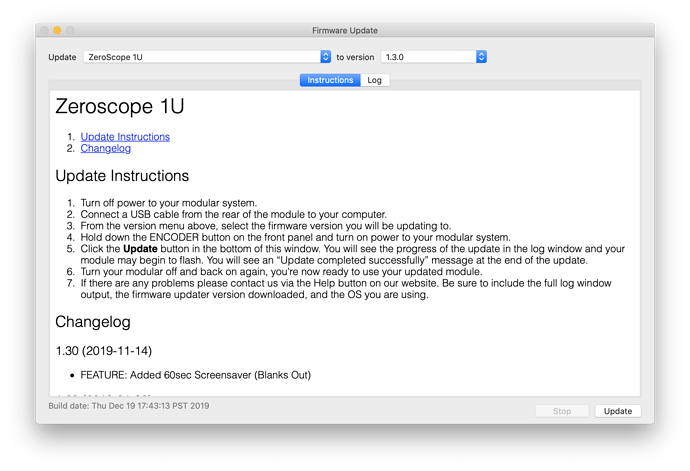 Thanks for the instructions. The update will not install for me, however. I installed the STM32 Bootloader and it says “successful”. But when I try to install the firmware this is the log output I get:

If you can shoot a video of you performing the video and send it to our support team at support@intellijel.com that would be good, we can see if we can find the problem there.