I was checking out the stats for the new xy expander (by the way, that looks like an amazing solution to so many problems—good job team!) and comparing them to the stereo line in-out 1u modules. They can obviously connect using an x jack for the left and a y jack for the right, but I was noticing with displeasure that the stereo line 1u modules require a 6-pin connector cable in order to connect to the external jacks. This forces a person to allocate two jacks for input and two for output, and requires an external stereo splitter for many cases.
I was wondering two things: is it possible to do some jumper magic to enable a stereo input/output and still have two jacks available?
Moreover, could this be done to one of the new xy expanders so that I could literally just connect it to my laptop or phone and then my headphones for some instant-remix type stuff? That would be really cool.
That brings me to my final point. The headphones 1u. It needs updating. Either there needs to be an option to buy it with a 1/8 jack instead of a 1/4 jack, or both need to be on the panel. Alternatively, there could be an output jumper so that it is also compatible with the xy expander, but still reduces the signal with the attenuater.
Am I asking too much?

The Stereo Line Out 1U has a 3-pin jumper to connect to the Headphones 1U. This could also be connected to the XY to provide an 1/8" stereo out or 2 mono 1/8" outs, but you would not have any attenuation on the signal.

If I used jumper cables, could I instead connect the xy to the 6-pin connector on the Stereo Line In or Out to be able to access the attenuation features? If so, which pins would go to what? The stereo line in and out use the jacks on the cases like mono jacks when they could support stereo it appears.

Hi there, I had the same question! I was looking through the manual and was hoping I could use some aftermarket cables to connect the 6-pins (on the stereo line out 1U module) to the stereo connectors on the XY?

For anyone who is looking to do this, the answer is “yes” you can do this.

You could use simple dupont female patch cables to connect things, or if you are feeling industrious, it would be easy to make an adapter board or a custom cable. I made a little adapter board,

What I wanted to do was to take a single connection, lets say “Y”, and patch through an unbalanced 1/8" stereo connection - like from a line out or headphone jack on something - directly to the stereo in 1U. In this case, I am converting from a pin ordering of TRS to a pin ordering of TSR – If you have a three pin connector, where 1 corresponded to T, you’d simply swap the other two pins.

I’m bad at explaining this, but I’ll attach a kind-of-OK diagram that may explain it better.

The end state of this is for me is that I am able to take a 1/8" stereo connection into the Y jack and get that into both channels of the 1U stereo in, which I think is the use case most are going for. If you wanted to take both X/Y jacks in, with one as L and one as R, you’d actually use the same connector, you’d just connect it to the combined X/Y socket on the X/Y connector as opposed to the socket for X or the socket for Y.

The only way this gets weird is if you are using 1/8" balanced connections, which basically don’t exist in the wild, but it’s still doable. 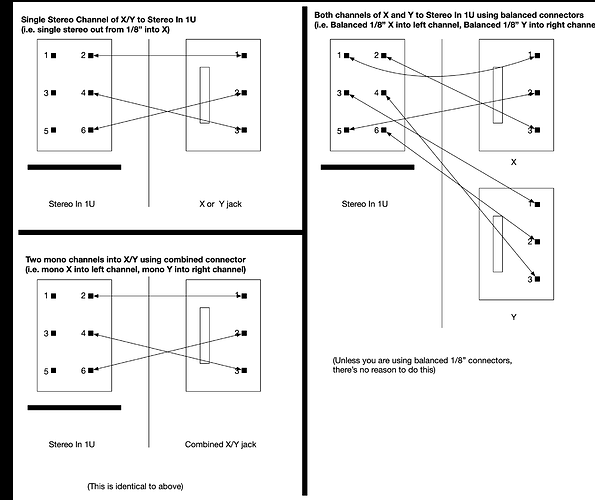 The important thing is to pay attention to which side of the connector is the ground on the Stereo 1U - Look for the line on one side of it, similar to how you would look for the -12V on a Euro power connector.