Please send me a direct message with your e-mail address if you would like to beta test the newest Rainmaker firmware!

I only had a few minutes last night to upgrade and try it out. (super smooth upgrade too)

It sounds so good with any source I throw at it, is there some sort of auto-gain built in now? It’s way harder to overdrive. It feels way better to control, less level tweaking, more delay tweaking

Pumped to dive in deeper this week.

Jim added auto gain control to the delay and comb section (plus master output I believe) so that if you crank feedback in either section you will never clip!

Another advantage of this is that now in the meter section you can turn up the gain much more for each section since you no longer have to worry about headroom in the same way. It also makes the range of the wet/dry seem more normal.

The feedback range for the delay section has also been reduced from 0-200% to 0-110% (approximately) which we think is a more usable range but we will rely on beta tester feedback a bit for this too.

You will also notice that modulation in both sections is smoother, especially for Comb Time.

I know this doesn’t bode well for an application to beta test, but after poking around on the forum software for awhile, I don’t see a way to direct message users. How can I get my email over to you? I’m interested in beta testing.

Just click on my avatar and you will see the option to send a message.

That’s the problem, I don’t see an option to send you a message! Do I need to have a certain number of posts before that is enabled? 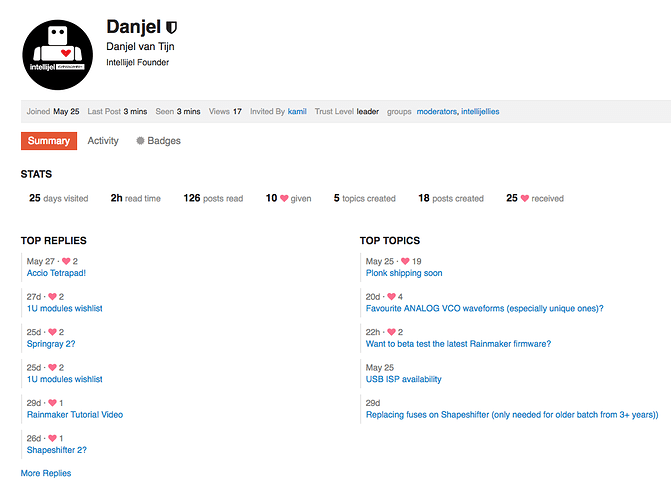 Yes, you need to be “trust level 1” - have to have spent a minimum amount of time / read minimum number of topics before getting that. It shouldn’t take too long. It’s just a basic measure by the forum software to keep spammers from signing up and then immediately messaging users.

Yup, got it earlier and sent Danjel a message. Thanks!

Interested. It’s there a deadline to apply for beta testing, and for the final release? I’ll only have access to the PC I use to update Rainmaker and Shapeshifter for a couple of weeks more. After that, I would have to try Mac only, so I’m hoping the firmware would released before then.

The absence of clipping is a blessing.

In the comb unit if you choose the /1 as a source for the clock, the comb clock is now the same as the delay clock ( very nice ) but in this case the clock div does nothing.

If your comb clock source says /1 then you probably didn’t update the display firmware. It should say DELAY/TAP

You are right Kamil, i was not able to update the display firmware.
Danjel gave me a link to obtain the updater, but there was no executable file in the files i obtain after dezipping, perhaps he gave me the macOS one, not sure.

So i go to the intellijel site, i found the intellijel_firmware_Updater_windows_2017-05-24 but when i launch it there is not rainmaker in the list.

Ah, we only have the beta display firmware for macOS. I’ll see if I have time to make one available for Windows tomorrow, though I’m pretty busy trying to finish off the Plonk firmware so we can get those shipped

I manage to do it with a friend’s MAC.

Will have to spend a bit of time on the forum before sending the PM, I see.

i just installed VB on my mac…

thanks for your great tutotial by the way !

After some hours with the new firware, i didn’t have any crashes.

I found the module easier to use because of the modification of the feedback settings.

The possibility to command the comb section with the clock of the tap delay is really very very useful, in this case will it be possible that div parameter function ? ( Actually it does nothing )

I prefer the new way the encoder is functionning : rapid if you don’t push it, slow if you push it but it’s not a big deal.

while the auto/gain has helped a ton with keeping things crisp and clear, the lowered feedback range makes it a touch harder to blast the sound in and out of quick busts
of distortion.

feels like the feedback could be increased again since the source and output are auto gain controlled now. Modulating it has an attenuator anyways, can be self limited to less than 200%

Quick question - will updating the firmware overwrite my homemade presets? I’m gonna do a backup just in case, but would be nice to know.