Here’s a thread to make suggestions for new modes for future versions of the Tetrapad firmware.

The outputs become 8 different triggers. Touching the vertical axis sets the ‘height’ from which a ‘ball’ (indicated by the LED) drops. When the ball hits the bottom a trigger is output from the first of the two associated outputs. When it reaches its zenith, a trigger is emitted from the other output.

With the planned expander this mode could also become syncable to external clock.

Very much inspired by the bounce mode on the Tenori-On and similar patches for monome grids.

To be able to set free CV to use as a microtonal keyboard! Right now the keyboard modes only send pitch CV quatized to the 12 semitones…

Just wanted to chime in, a bouncing ball mode on Tetrapad would be amazing!

Yeah actually I thought about doing bouncing balls / springs in the past. Just haven’t got around to it yet. Maybe after the Tete launch I will do some experiments. We’ve added a few more options for pads in the combo mode already, so it seems like a good candidate to add springs / bouncing balls.

I would love a more customizable keyboard mode. Ie, able to be combined with other modes. I use mine as a function generator, usually in custom keyboard mode. I can still use pressure and position, which you can’t in voltages mode or some of the other ones. Basically what I would like is a cross between custom keyboard and voltages. A simple button to toggle latching from one of the encoders is all it would need. Maybe also the ability to use five keys and only a few functions? In keyboard mode it always just outputs four notes, position, pressure, a trigger, and a gate. I would love to merge the trig/gate into one (but not always) again toggled with encoder click. Then the additional output could be another note or something.

Also, on the same lines, I would love to have everything in voltages mode except for one pad. This I would put into one of the combo modes. If in a keyboard/chord mode this would not mess with the pressure and trigger and stuff for the other pads.

Maybe the expander can do some of this stuff? Uncertain. But definitely looking forward to it!

Would love to see a bounce mode. Could you do it similar to the LFO mode? That would be great. I know a lot of things cannot process negative triggers, but I have a sequencer idea (probably already done tho) that could the use this as a forward/backward thing either as trigger to change direction or as a clock.

The expander will cover you in some of these areas.

Voltage mode’s 8 outputs (any/all) can now be quantized, and you can get a gate and pressure output from the Tete. You can also get up to 16 banks now.

Notes Mode (Hybrid of Chord/Keyboard) Remains pretty similar, except you can have up to 16 keys available in any of the original modes (Custom/Chord/Scale)

In Combo Mode you can get a huge mix of tools, and anything with a position out is quantizable. and all the outputs are scalable from one to five volts (as well as CV’able), so a mix of modulation and pitch control is definitely doable there.

I like the idea of a Voltage Mode Column in Combo, I’ll put it on the feature request list

Hi,
This is my first post.
Here is a new mode wish for Tetrapad, called: automation

I used this a lot in max/msp for automate volume/filters etc.

Basically in Fader mode, the encoder acts as an “riser” or “lower” of the fader state.

The encoder behavior should be exponential and not linear. This means rotating a few “clicks” CW the fader position will very slowly starts to rise and continue rising. Rotating more CW the fader will rise faster till reach max level.

Push the encoder to zero the automation (no automation).

Then CCW will lower the fader. The fader can be by any point normally moved but the automation continues (if not zero by pushing the encoder)

Think using this for example with 4 VCA in a mixing setup where you can automate the fade in/out threshold to audible level. Ideal in slow settings would be 0.1V in 1-5min or slower (that’s why exponential) and in the fastest half second for 5-10V. 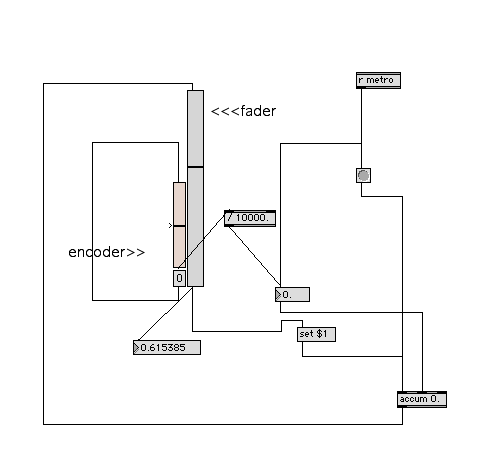 Pretty cool idea. Basically a variation of the fader mode that moves on its own?

I think you can already approximate this by using the friction setting on the faders. Basically you can dial up the friction using the encoder and then touch the fader somewhere. Then instead of jumping to that location it will move towards that point at a rate determined by the friction amount.

Pretty cool idea. Basically a variation of the fader mode that moves on its own?

Thanks. Yes and the encoder devines the speed.

I use this a lot in live settings where I have some channels rising while I am busy with doing other things. I first set the channel somewhere below audible presence and then within 2-3min make an ultra slow fade in. Usually I do this with several channels at the same time.
Often I work just with the encoders to rise or lower the channels.
Once I hear that the new sounds are there I set the zero “encoder” to stop the automation.
If it’s too slow I speed it up by changing the speed of the automation. It’s a different approach as I mainly use the ear.

I had a discussion with Dieter Doepfer about this idea some time ago but it was too tricky to release this with analogue circuits. Surprisingly, I haven’t come across any eurorack module which can do this. Tetrapad, in my view, is built for this

I tried with several slew’s but it’s very different and not easy to control.

If you’ve tried the current friction feature on the Tetrapad, can you tell me what about it makes it hard to control for this purpose?

Speed. The slowest setting is in my max patch the fastest movement. Then, it’s hard to control.
As well going backwards
There is a very feel of control to it. Micro movements which would be hard to do with fader.
Do you have max/msp ?

(I have a tetrapad only with the latest firmware. I assume you mean holding the red button and turn the encoder ?)

Yes. Do you think it would work better if there were slower speeds added? or is the interface itself an issue?

Do you have Tete? You could also potentially accomplish this on up to 3 channels using the XYZ inputs to control level of a channel.

not sure if this is still works with newer version of max. I am still on 4.6

Looks like turning the encoder is unused in fader mode so that would be a possibility. However clicking the encoder already toggles latch / non-latch so it would need an alternate way to reset the increment.