It would be a game changer if we could get preset-chain-advance via gate Ah La AUX in. Metropolix is already my favorite module, let alone sequencer, but it would be that much better if I could take a gate from a reset signal, random gate, or end-of-sequence gate from other modules or sequencers and use that to que the next preset in a chain.

That would be an amazing feature !!!

Yeah that would be fun. Similarly, I’ve often fantasized about the ability to temporarily latch onto next pattern. As in; when a gate is high the next pattern plays until the gate is low, reverting back to first pattern. I think that would play nicely in Aux A while Aux B could be gate to chain progress.

Additionally, It would be fun to construct a pattern chain, but have the order of the patterns played randomly. perhaps include probability.

I’d also love to control preset changes externally, but I’d like to be able to use CV rather than a gate. CV to address which preset in current bank and then on a reset, it would switch? Ultimately, it would be great to be able to sync it to other external gear via midi program changes… though program changes usually happen at the top of a measure so I wonder if the change could happen in time…

cool idea, I will add to the wishlist. The next version is pretty much done (just waiting on… something), so it will not show up in the next one.

Presets Selection/Load via CV might be trickier from a timing sense. We wouldn’t want to do anything that causes hitches or hiccups. I beleive this is already on the wishlist.

…something? That sounds exiting, like an expansion module to add more tracks? Either way, you guys have been killing it with these updates and I’m looking forward to seeing what’s next

Is it possible to assign a reset gate to outputs A&B? Or how do I sync steppy to metropolix, without the expansion module or pressing reset manually each time on steppy?

You can also put the Steppy in RUN mode and send a run gate out of A or B from the Metropolix, if you want it to follow the start and stop.

Great thanks. I searched the manual, but I guess because of reset is in “preset” I overlooked it.
Andre.

Suggestion - I am using the Triplatt to control the XYZ Inputs on the Metropolix - usually have them set to X - TRK1 Probability, Y - TRK2 Probability, Z - Octaves for both tracks - which is great - but to view changes I’m making visually on the screen I need to hit the cooresponding button before making the change. Would be great if I just twisted a knob on Triplatt - Metro detects that a change is being made and momentarily displays the parameter being changed (like tapping the button) then timesout after a couple of seconds. Hope that makes sense

would be a really nice quality of life improvement for playing live. 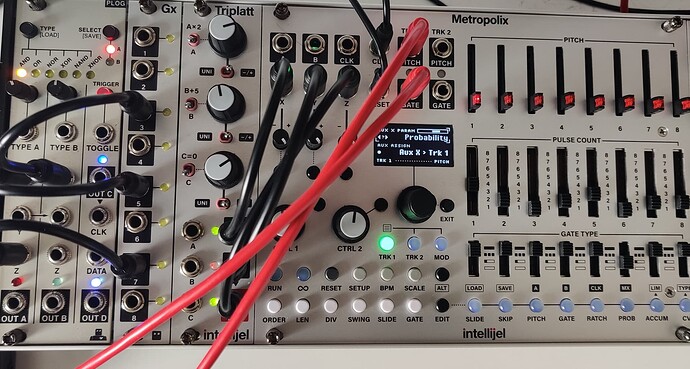 A suggestion for a later update, would it be possible to swap tracks by pressing simultaneously the tracks buttons ? If it starts at the next first step it will be so great.

I would like to create the next sequence while the other still running and swap easily without monopolizing a knob.

Would be great if I just twisted a knob on Triplatt - Metro detects that a change is being made and momentarily displays the parameter being changed (like tapping the button) then timesout after a couple of seconds. Hope that makes sense

would be a really nice quality of life improvement for playing live.

I don’t think we would add something like this, the display would go absolutely wild with constant inputs like LFOs or other sequencers, and the 3 inputs would be fighting for screen space. We could lock this behind a toggle, but If you even had 1 LFO coming in, your screen would constantly be jumping to that page, and you would not be able to access anything else.

A suggestion for a later update, would it be possible to swap tracks by pressing simultaneously the tracks buttons ? If it starts at the next first step it will be so great.

I would like to create the next sequence while the other still running and swap easily without monopolizing a knob.

Couple ways you can do this now: 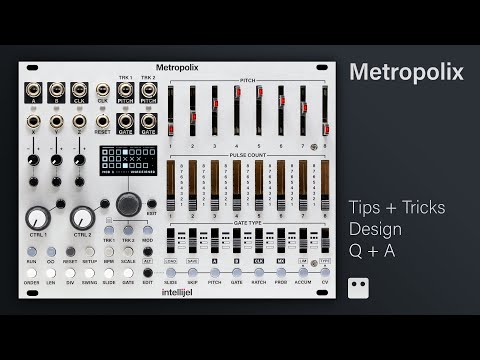 Right now holding Track the track buttons together may interfere with the copy and paste functionality on certain screens, will add the idea to the wishlist.

Suggestion - adding a “solo” function inside the ALT-TRK or ALT-MOD menus to solo the MIDI to only what that track or mod lane is doing. Ableton Live still doesn’t let you manually map MIDI CC’s (by manually I mean typing or selecting their destination without needing to ‘turn a knob or fader’) so setting up mod lanes to control different this is a pain since you have to mute the rest of them to make changes. This is really more of a Live problem (or setting up templates problem) but I figured it’s worth a shot.

Hi ! Thanks for the trick. Perfect for me !

Suggestion- When using external MIDI clock over USB, blink the Clock LED at the clock in jack (as if something was plugged into the jack).

Another suggestion; It could be nice to have more bass line friendly play order posibilities. And love the idea of expansion module to add more tracks. Lastly, if it can dive more into eg per note, it would be bombastik.

Just came to my mind, A and B can not be written separately

Hello another thing just happened to me and if this is possible it will be huge. ¨the clock reset out¨ is on running and ´reset input´ is on run. My clock source is midi. So whenever i press reset it puts my pattern in different clock time. I love it because it helps you also find different shapes. But it does not save at his new form. Is that possible to grap the last form and save it?