Use one of the eight mod lanes to toggle “accumulator?” you can put the mod lane gate/trigger on stage 5 - 8, for example and set the lane’s clock division to /64. that will allow the un-accumulated sequence to play for a number of times before it kicks in.

theres a few different ways to approach this. mod lanes are where i’d suggest starting. learn mod lanes and watch how infinitely far a single pattern can go

additionally you could save the pattern to two present slots, one with accumulator and one without, and then pattern chain the two

Thanks @amblues! I was typing the same thing as you posted

Absolutely brilliant. I was certain there would be a way, just needed someone with a more in depth understanding of the module to point it out. Thank you!

Just turn the RUN button off and then turn LOOPY on. Now you can play the stages without the sequencer running

You can set a MOD lane to accumulate and select how many stages and then divide down to your desired time. 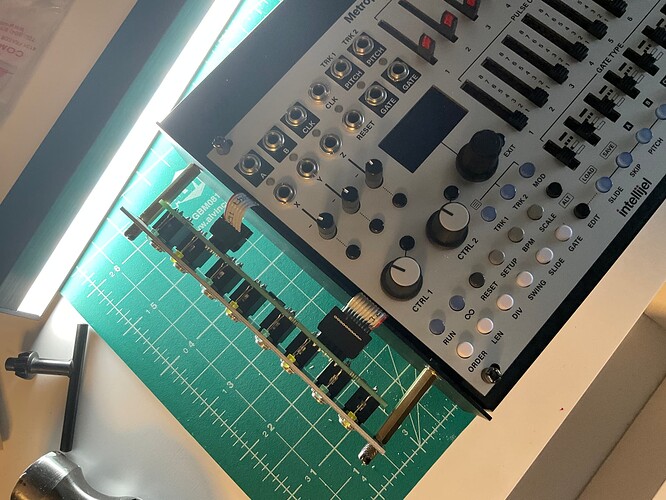 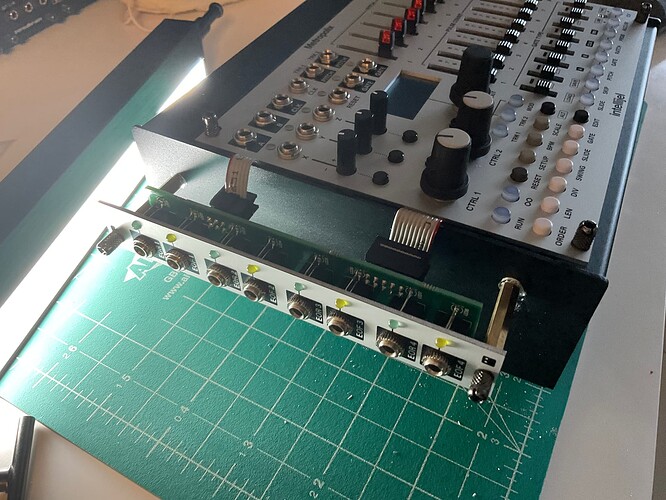 Thank you for such an awesome, intuitive sequencer, Intellijel!

A global menu toggle to assure that, for a time, everything you are doing to one track will always be done to the other track. I’m aware that it’s possible to copy and paste settings from one track to the other but it would be cool if you didn’t even have to worry about it with this option engaged.

At this point it seems that you won’t be creating the option to completely disconnect the switch settings for both tracks (which would make it function more like a standard sequencer with independent tracks), and I’ve been trying to get on board with this idea of the tracks being connected. So what I would ask for (perhaps as a consolation) is to have the option to completely link the tracks perfectly for any desired amount of time (maybe if the settings for both tracks are not identical at a given moment and this option is engaged, any new changes to one track will override the settings on the other as well).

What I am finding is that with this idea of using the tracks in a connected way, sometimes (usually) I find myself wanting to create a sequence with Track 1, but then I want to go over to Track 2 with the knowledge that it is exactly like Track 1 and then start creating variations from there. As things are, if I completely ignore Track 2 while building Track 1, I have been finding that this first switchover to Track 2 is often less musical. If the tracks were linked up to that point though, I think I would have an easier time finding a musical sequence on Track 2. And for users who like the element of surprise with the present functionality, they would still have that option.

Hey y’all,
Apologies if this is already mentioned above but there are too many comments to go through as I have yet to get this sequencer but goodness it seems awesome! You got me at skip invert!

Anyway, I think it would be sweet to have a small expander with 4 or 8 sliders or knobs for complete control over that second track and the ability for that second track to effect root on the first. Basically thinking bass line to add to the lead that’s equally as jammable as the first track.

I love that there can be some intertwined sequences, just thinking about peeps with smaller performance cases that also want the power of this sequencer. Would be sweet to have a one stop shop for melody sequencing especially given the built in quantizer.

Another thought which could be a whole different sequencer would be one that allows you to split the 8 sliders to two concurrently running tracks. You’d use the encoder to dial in where the split would be (5 stages on the left, 3 on the right for example) and have the buttons at the bottom separated by two different colours. This would then override the second track to the split track so you’d essentially have a 5 stage metropolix next to a 3 stage one. Just feel like that could be so awesome and again would bring jammability to two tracks via the sliders and pulses.

Ideas any good ya think?

Regardless, gonna figure out when yo pick this one up. I have a small setup right now but this jives with me so much. Nice touch on the ratchets on stages with more pulse count than ratchets creating slower than clock pulses like a 3 pulse in a 4 pulse time. So good!

The different starting positions and playback speeds create a wonderful harmony.
You have to play for a long time to realize how good the workflow is.
The art is in the limitations.
Metropolix is a great sequencer.

Another thought which could be a whole different sequencer would be one that allows you to split the 8 sliders to two concurrently running tracks. You’d use the encoder to dial in where the split would be (5 stages on the left, 3 on the right for example) and have the buttons at the bottom separated by two different colours. This would then override the second track to the split track so you’d essentially have a 5 stage metropolix next to a 3 stage one. Just feel like that could be so awesome and again would bring jammability to two tracks via the sliders and pulses.

FYI this can be achieved quite easily right now. All you need to do is set length = to 5 on Track 1, Length = to 3 on Track 2, then offset on Track 2 = to 5. I guess it wouldn’t hurt in theory if it were a little easier to get there though.

Welcome, by the way.

Always interested in seeing ways that people use two tracks, let us know if you have any examples.

I think the success rate with the “blind switchover” approach depends on certain factors including the style of music one is interested in making. And I agree, I a big reason I love Metropolix (and similar gear) is because of the limitations. Less is definitely more for me when it comes to being creative!

That’s awesome that you can do that in that way. Yeah a quicker way of getting there and just controlling 1 split parameters would be pretty sweet. I’ll have to look at the manual for the functionality you’re talking about to fully get it. Wow there’s so much in this sequencer but it’s so playable right out the box. I’m super impressed! 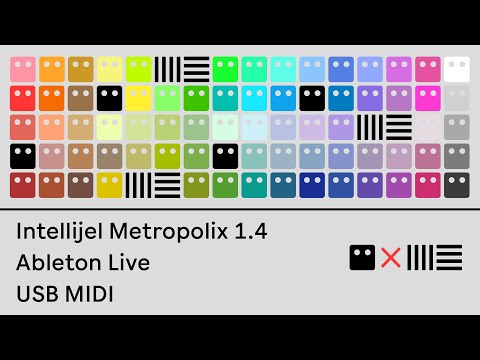 The 1.4 update brings USB MIDI and some other new tricks to the Intellijel Metropolix. We’ll explore these features and more in Ableton Live 11.

The Metropolix 1.4 update will be released on Feb 11 following the stream.

what?! how … what? (this is very exciting to me as someone already using Metropolix & Ableton)

OMG.
USB midi! - how what where - are we going to use the USB port below the unit for this?
I love this device

Wow, this looks really exciting! Will this be Ableton exclusive or could it be integrated with other DAWs as well?

I have Ableton but I much prefer Bitwig because of it’s integrated modular approach to making music.

wow! how? via an expander?

Google outed us, so here’s a link to the USB Extender.

Up Top! Extends any Micro USB connector on the back of a module to the front panel of your modular case.

It’s a simple passive extender, it connects on the rear of the Extender to the rear of the Metropolix with an included double-ended Micro-to-Right-Angle-Micro USB Cable.

This will be the official way of bringing that connection to the top panel, but it’s really just a fancy extension cable. If you have the means of running a cable out of your case (in a safe manner) then you can also do that.

Wow! I can’t wait to see what this will allow us to do.