Mmmmm tell us more about this “1.2” of which you speak

I’m not sure if this is possible with the current architecture, but I find it to be one of the most powerful features on the Makes Noise Rene V2. By enabling one of the CV inputs to recall saved sequences, the Metropolix could play REALLY nicely with other CV sequencers like the Voltage Block or the NerdSeq for more complex progressions.

Yeah, this is on our internal wishlist. No ETA yet.

Keep and eye on this thread, Metropolix and Gx - #203 by slowwild, it’s where the most Metropolix chatter is happening.

I’ve been testing out the Acid slide style and it just seems to make my sequence super quiet.

Should I be doing something in particular to get this going properly?

Keep in mind that an acid slide holds the gate high. The Sustain slider on the ADSR should be set to a non-zero level.

I’d like to position my GX more distantly from the Metropolix in my case.

If I make a new I2C cable, is there any problem with lengthening it, say to 30cm instead of the one included?

Would we get a little bit of Steppy’s ADN in GX ?
(having a step sequencerish mode in Metropolix using GX’s outputs)

This isn’t something that I’ve tested yet, but I can’t see there being a problem with longer cables unless it gets really long. For example MIDI cables work fine up to 50ft, so I’m sure 30cm is fine.

Gx/Qx uses standard 6-pin ribbon cables so you can buy longer cables from electronic parts suppliers or make your own.

What do you mean by ADN?

I think step sequencing with Metropolix and Gx has been considered. Probably the only way to implement it though would be to take up all of your MOD lanes so you would have one lane per Gx output. Personally that seems like a waste of the MOD lanes to me as you can do so many more interesting things with them. But then I already have Steppy so I’d be using it alongside Metropolix anyway.

I2C is not really meant to transmit over long distances, it will probably work at up to 30cm but it has not really been tested. The max length is definitely much shorter than a MIDI cable though

Whoops ADN is the frach abbreviation for DNA.

It was just some though question I have regarding Loopop’s video.

I’m currently am on the hunt for a 1U Steppy. It seems they are out of stock everywhere.

For the record, I’ve got 2 of them connected together with an adapter. The resulting length is 30 cm and everything seems to work fine

Has anyone put any fader caps on their Metropolix yet? My Batumi has the same faders and I snapped the black plastic off of one of them when I dropped my phone on it

Now it is taped up with some painter’s tape but was thinking I’d try to avoid this on future modules.

Thinking bout getting these but of course I’m having a hard time finding them in the US:
https://www.thonk.co.uk/shop/sifam-slider-caps/

I recently added the little transparent ones that WMD sells to all my modules w sliders. They are compact and feel nice to the touch IMO. 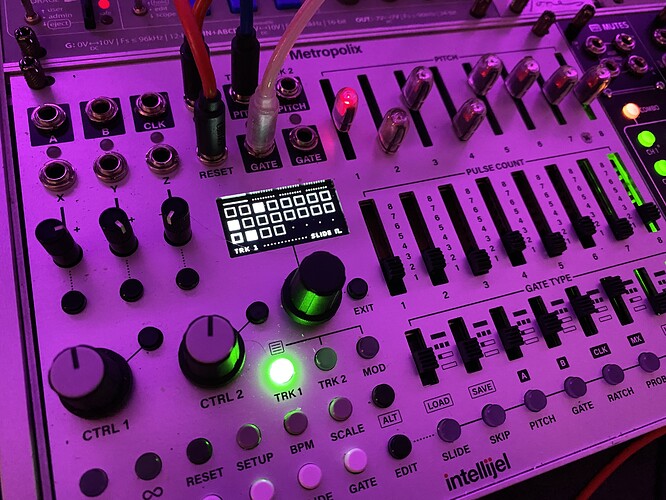 Another Big Metropolix Update, check out the video for the Highlights— [Metropolix - version 1.2 - Customise and Modulate Scales] Here’s the details— 1.2.0.0 New User Scales! 100 User Scale slots: 10 Banks, 10 Presets per bank. Modulate User Scales in a selected bank. Scale/Bank selection remains global, while modulation is per-track. Scale Lock allows you to lock the sequencer to a scale, while you edit or browse others. Locking a User Scale is called a Scale Mod Lock. It acts…

Very excited to install this, but can you just confirm that presets will not be effected by updating firmware? If so, is this something we can generally count on in the future?

Your previous presets should be unaffected. If you do find a bug that slipped by in our process, the original data is unchanged if you load a preset and don’t resave it, so we should be able to fix the loading process…

I thought Metropolix was very much in final product form when it was released (it felt fully featured and worked flawlessly for me) – so I’m amazed at the pace at which Intellijel is pumping out these firmware updates. Thank you!! Looking forward to installing this one now…

And we’re not even done

With this firmware update, is the Metropolix one of the few (the only?) Eurorack sequencers on the market where you can modulate (ie sequence) scales? This feature was one of the main draws to the Sinfonion for me, but of course it isn’t really a sequencer…

I always thought that this was a strange limitation, and it felt like most Eurorack music ended up being modal as a result.

Really excited to see the possibilities with this update…