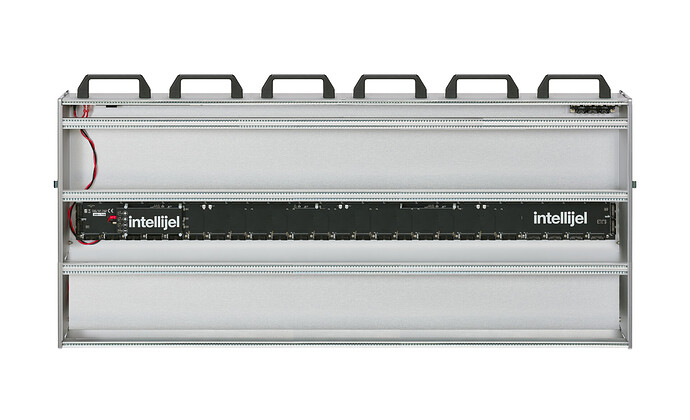 Bumping this thread with interest. Would love a 10U or 13U 104HP flat case in this style.

Totally agree, would love to see a 13u Intellijel case in any of 84hp, 90hp, 104hp, or even 126hp widths - if the structural integrity of the aluminium body could support such sizes.

But it would very much need to be at least the depth of the current 7u cases, not the palettes. The 7u case has pretty much the perfect depth on its upper 3u row.

I definitely need case bigger than 7u104hp which I have 2 of them. I was searching 9U+/120hp+ cases and MDLR 10Ux126hp seems the right size for me, however it is very heavy (33lbs). So ideally, I would like to see following sizes

Please make with same material as 7u cases as it is sturdy and light!.

Added vote for a 10u 104hp, that would be awesome!
I too have landed at the MLDR case as the only viable one at this size, but yes that’s very heavy! If an Intellijel monster case does appear, it would be a good feature if the lid could fit on the back securely when opened as the MLDR one does. For those of us placing the case vertically on a shelf this would make it much more stable. 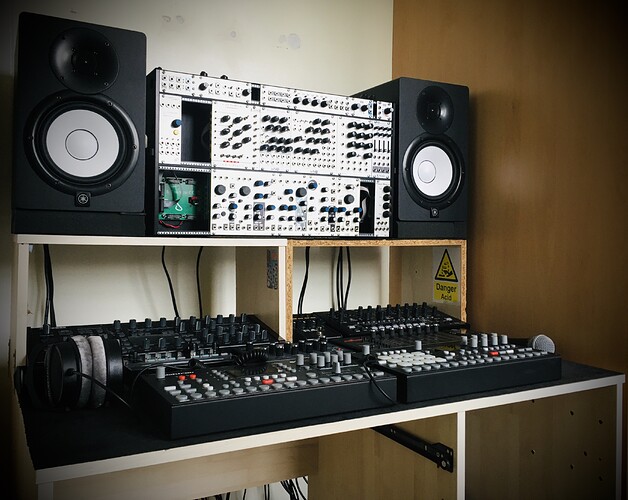 I’ve currently 4 7U Cases on my desk (joined together 2 by 2) , the only option for me would be to have wall mounted joiner plates to have my setup extended with 2 extra 7U cases hanging on top…

I have thought of hanging stuff off the wall behind the desk, but the wall is basically vertical sand

Meantime, I’m thinking of a MN 104hp skiff to place UNDER the performance case, to give me a third 3u row. I’m going to place some storage cubes behind the whole lot, making it snug against the wall. I need a way to secure the skiff to the shelf and the performance case to the skiff and storage cubes, but all I can come up with is pedalboard velcro. There must be a more secure way of doing it than that…?

Maybe joiner plates could be adapted somehow, or some kind of slimline clamp/s?

It has been discussed before, joining a 4U case with a 7U one, but I don’t remember anybody really liking the results they got. Lots of unique solutions were suggested though. I’ll see if I can find the thread

This was a good one, one of my first bookmarks (

After waiting over 3 months, I finally obtained a 104HP palette to join my two 7U 104HP performance cases. By Default, I am sure the assumption is that you place the palette in front, and the stacked 7U cases behind it… Well at least for me, that arrrangement sucks. having three 3U rows, two 1U rows and the palette tools between you and that vertical case is horrible. you better hope that the modules in that case are “set and forget”, because after 3 hours I could feel it in my back and arms. I…

How essential is a lid? They add to cost and also make the product almost twice as big for shipping. Also a lid that only closes if there are no patch cables is considerably thinner and simpler than one that allows patches to be kept in place. I kind of feel like a monster case is rarely going to be transported other than say moving house or studio. i.e. not the same as packing it up for a gig where you want to keep a patch intact.

I think it depends on size of any future case. I could see someone transporting a 10u 104hp for a gig but not bigger. The 7u 104hp is so slimline (fantastic design it is) that another 3u wouldn’t feel like a ‘monster’?

I signed up for the forum to post my support for an Intellijel monster case. 14U would be great with a 1U row at the top (for jack access) and one in the middle for utilities.

I only bring my 7U on short trips but I can’t imagine travelling with a 14U or even 10U, so my vote would be a lid would not be necessary and it could be more intended for studio use.

Personally I would prefer powered, that was one of the reasons I went with the Intelllijel 7U was that the PSU seemed battle-tested already vs. another brand.

Probably someone already suggested (or already confirmed not to work) this but would it be anyhow possible to create a different kind of joiner that would keep two cases stacked vertically?
I could imagine that a joiner like that could either take use of the holes of the handle which would have to be removed to stack them, or simply using the current joiner ones. Plus you would need some sort of stand that would keep the balance on the bottom of the cases.

Nevertheless, that could be useful as it would save a lot of space, probably (depending of the stand) even allowing 2x2 intellijel cases with a massive 208hp 14u, also, the intellijel case is already by design armed with features that would allow this with minimum effort. (on my view)
(Now sure how to handle the bottom case power supply tho

could a flat connector work to minimize the space needed between cases?)

I can understand a brand new case for new users or those who are expanding, but I see a lot of people already with multiple Intellijel cases could probably benefit from this.

Pardon for the lame draft but I think you get the idea.

I feel like a modular expandable case would be amazing!

I suggest you design the case to accept a lid, but make the lid(s) an optional accessory. Those who dare travel with a monster case can buy lids and be happy!