Can anybody confirm whether the 7u joiner plates:
https://intellijel.com/shop/cases/7u-joiner-plates/

could be used to have only one intellijel 7u 104hp case stand more upright?

I would like to make mine stand more upright on a table and thought about getting a guitar stand but then someone suggested this to me. It has sharp edges it seems, but if it works as a stand then one could pad these edges somehow.

Thank you very much.

the 7u 104 hp cases have their own kickstand with 2 different degrees in the case. You can stand it without the joiner. The joiner is used for 2 cases.

also the feet is round with rubber. its not sharp.

Thanks for your reply TonyIdaho. I know the case has their own kickstands with 2 different degrees, but I want to have the case sitiing more upright; even the higher position is too laid back.

I wonder if the joiner plates could be used to make one case stand more upright. anyone can test it and send a picture maybe? Thanks.

The joiner will make it slope lower than the ones in the case. However the top of the joiner goes about 80degrees but you need a 2nd case hooked to the bottom to balanced it all.

However the top of the joiner goes about 80degrees but you need a 2nd case hooked to the bottom to balanced it all.

Cool, that solves it then. Will try to get a guitar or amp stand then.

I was wondering the same. Will give it a try, but I assume it won‘t be secure and that indeed the second case is needed for secure positioning.

Just bought two acoustic guitar stands today to put my two 7Us next to each other in a more upright way.

Great Mike. Do post your results on the joiner plates. And let us know how the guitar stands hold up please. Or maybe post some pictures! 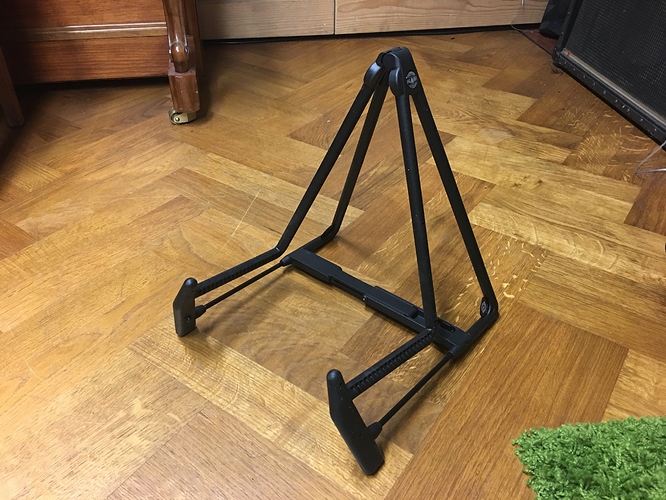 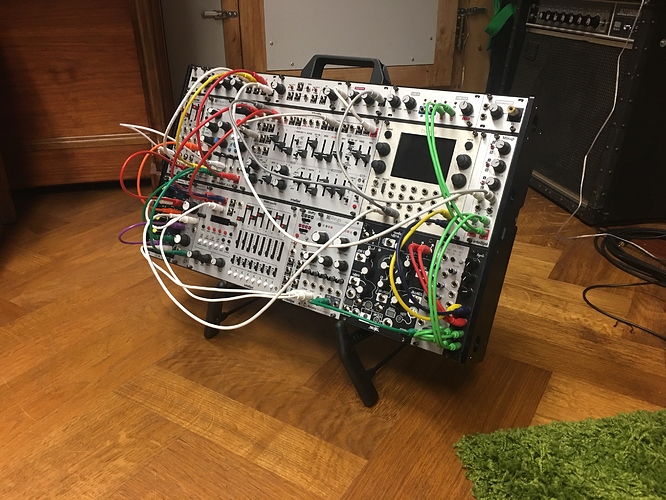 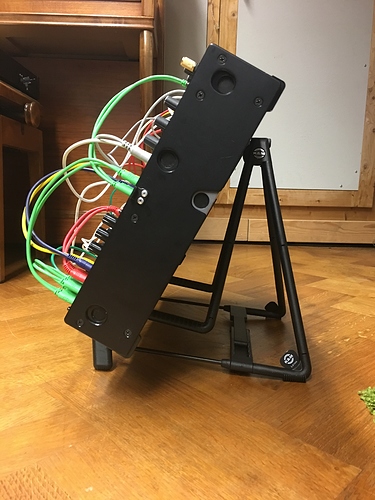 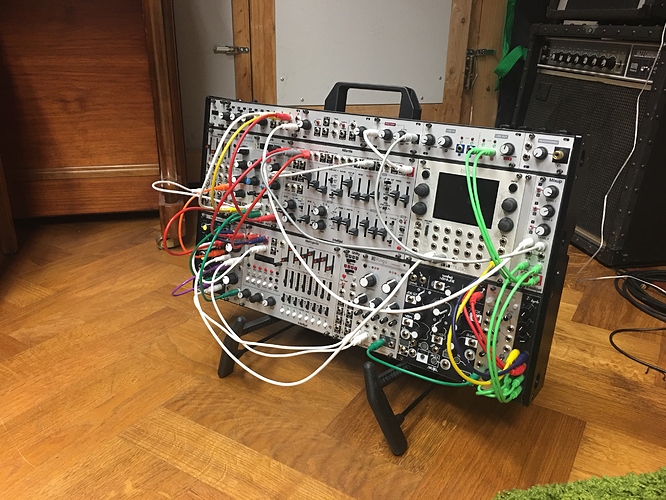 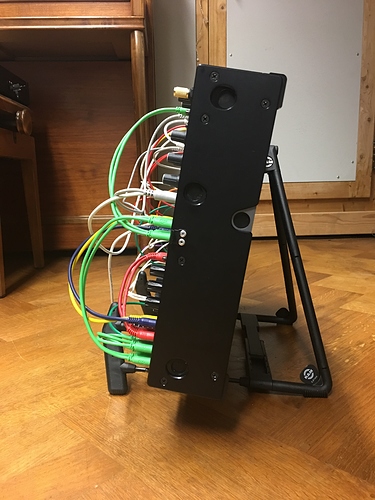 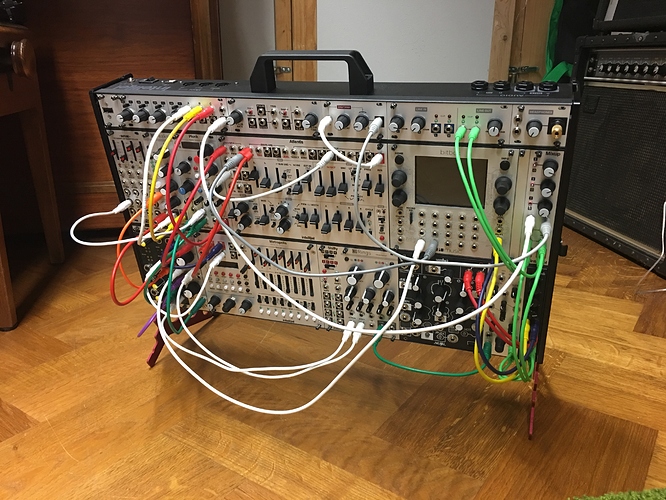 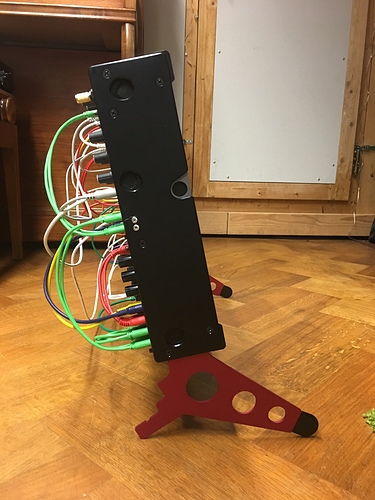 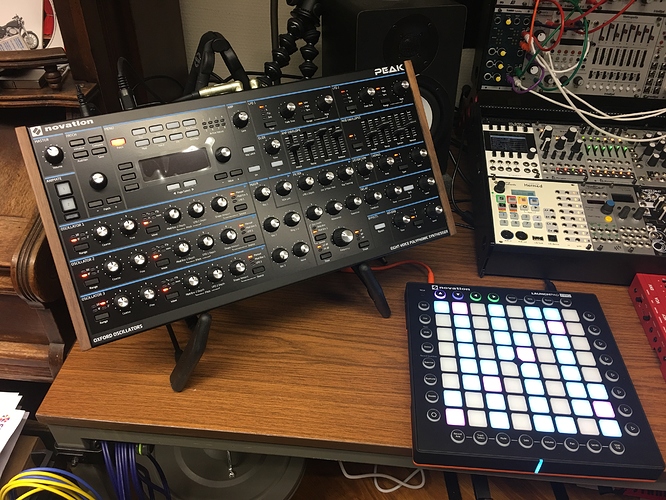 Here are the photos.

That is the Heli 2 acoustic guitar stand by K&M.
It‘s sturdy and works beautifully at different angles.
Most of it is rubberized so it won‘t scratch the case.

Using the joiner plates does not work to keep a case upright. As you can see the case leans forward and it WILL topple over with the slightest touch to the back.
You could choose to put something underneath the front stubs to bring the case up to a right angle or even further back, of course.

Lastly, a photo with the Heli 2 supporting the Novation Peak. Nice!

K&M makes great stuff. That stand looks like a good solution! I think I can see that it’s possible to adjust the angle? How much does that guy cost? Looks like a good pairing with the Peak too…

The base has enough space so you can choose between the angles shown and everything inbetween.

Thnaks Mike, that is reallyyy helpful. And funny enough I was going to get that exact same guitar stand! It has those little sticky edges on the front but they shouldn’t mess much with patch points and knobs from what I see in your pictures.

And thanks for testing the joiner plates. I was thinking of using them with the case in reverse (from your pictures), with modules facing the other way. But it is not stable I see now. Maybe intellijel gets an idea for different plates to make it stand firmly. It is an elegant solution.

Mike, could you please tell me whether when you use the K&M stand in the pictures is the intellijel case steasy? As you for example patch something (push in) into the upper left and right modules in the case does it wiggle or is it solidly steady? I ask because it only has the upper support in the middle when tilted all the way to the front.
Thanks.

You cannot use the joiner plates in reverse. They only attach to the case in one specific way. And the case would be totally unstable, anyway.

I agree that it would be elegant if Intellijel made a version of those plates specifically to set up a single case.

I‘ll test the stability of a case in the guitar stand later today and report back.

Hi, did tou have the chance to test the atability of the K&M? Thanks.

Sorry, not yet. Was too busy.
I‘ll post here my findings once I‘ve checked.

I agree that it would be elegant if Intellijel made a version of those plates specifically to set up a single case.

Intellijel, are you listening?

It would be elegant and simple to do I think. It would keep the case upright, and would take very little space anywhere.

I got the k&m stand and can confirm it works alright. But again, uses a lot of space still.

The K&M stand can be silghtly wobbly when patching in the upper corners, but I don’t see it as a problem at all.
Just buy one. It’s cheap enough to warrant the experiment.