Have had this set on backorder for a couple months now.
Nobody has both pieces readily available, and remaining individual stock continues to dwindle.

I have observed Perfect Circuit receiving several new shipments of Intellijel over the months, but these two modules aren’t coming in.

Is there something that prevents new Tetrapads or Tetes from going out?

Long and Mcquade in Toronto has tete but it’s not listed on there website. Regarding tetrapad I just bought one at Big City Music in California

Intellijel really has nothing to say about this, which reveals something more disappointing than any official response…

Used Tetrapads are about to hit 4 figures on Reverb

There’s one right now on Reverb at the regular price.

We are steadily building and shipping products, but there are world-wide parts shortages and Covid-19 related delays which may affect our production schedule. Note that we prioritize our dealers over our own online store, so your local retailer will be the first to receive new stock as it is made. Please check in with your favourite shop for pre-orders and stock information.

We are not providing timeline information on specific products at this time. We are still manufacturing, still working on firmware, and still working on new things. We’re looking forward to getting back to full speed as much as you are! Stay safe, keep jamming.

We are not providing timeline information on specific products at this time.

Sorry to be a stickler, I’m just really anxious to have this controller in my setup.
Something this special is worth the wait.

That’s not timeline, that’s “happening right now”. The trouble with component shortages and overloaded manufacturing plants seems to be, that you can’t say “it’s happening next month”, because there are too many variables which could turn that into “happening in three months” easily. Leading to even more frustration.

Something this special is worth the wait.

So then wait. They’ve already said that they want to be back up and running normally just as much as anyone else. Why would they want to slow their business down? There’s not much they can do if the parts aren’t being made, or are backordered.

I just didn’t think it was out of bounds to ask for availability when it seems to be a common request that is occasionally entertained throughout this forum.

I waited several months, read the rules, and did my diligence before even posting.
I am not trying to waste anybody’s time here.

I see you pumping out other modules;

What is holding these things up???

It’s not out-of-bounds, but you’ve already received a response which stated that they couldn’t give a precise timeline.

I’ve been waiting for nearly two months for Mutable Instruments’ Beads* to arrive. On top of that, it’s been over a month since my order — on Sweetwater — was received that included 4ms STS, Planar 2, Polaris, & ZeroScope. Multiple modular companies have been impacted (that’s three major players I mentioned) and, chances are, we’re all waiting on something.

*Perfect Circuit had said Beads would be back in stock late May. I never received any kind of notification that my order had shipped so I contacted them. They said they were informed that it was looking like mid-late July now. This is why it’s not a great idea to give a timeline when there’s a chip shortage overseas out of your control; you will, undoubtedly, be left disappointed.

If you visit Mutable Instruments forums, you can hear straight from the horse’s mouth that subsequent Beads batches aren’t expected until well into 2022. Emilie also makes efforts to explain why.
(luckily i already got a beads

I have had a Tetrapad & Tete backordered for 6 months now,
so I think my request for answers is reasonable

The horse spoke 6 days ago and said:

I don’t know the details either but I am doing my best.

But Intellijel never told me if they know or not.

Why are you being so dense? @ScottMFR, an Intellijel employee, told you:

We are not providing timeline information on specific products at this time.

That’s your answer. You don’t like it and you’re trying to press the issue until you get a timeline. If you’re so desperate for a Tetrapad and Tête then, as Scott said, you can look on other websites. A five second search yielded a pair in mint condition for $500 on Reverb. 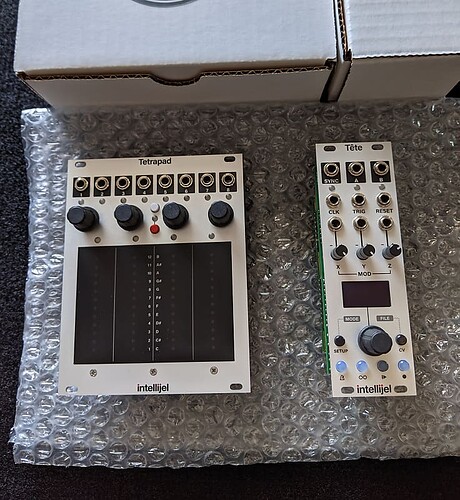 This thread seems to be going no where fast. I’m gonna close it.

Our contract manufacturer, like anyone in manufacturing, is struggling to meet deadlines. Right now it’s not really possible to give any estimates on products until units arrive in our warehouse, and judging by the lack of replies from anyone that is currently at the warehouse, i’m gonna say we probably don’t have any right now. Most of the warehouse staff is not on the forum, and it’s not part of their core responsibilities. The rest of us have been working from home since the start of the panedemic.

If anyone needs to talk to someone in support or sales, you can email support@intellijel.com.