You don’t want to go in blind, but you also don’t just want to hit play. Use track mutes, per-track probability, delay, clock divisions and sequence length to add even more variations to your track. Finally put it in loopy mode to stutter or loop slices of your sequence, or program unique fills with unused steps.

A Compact Module with Room to Play

Each track features numerous independent parameters that govern its playback independently of the other tracks. Specifically:

Tracks can be programmed by entering active steps on the grid or tapped in live as the sequence is moving. Tracks can be selected and modified in real time as the sequence plays. A select button allows you to directly access each track (and each page of 16 steps within that track) directly through Steppy’s intuitive multifunction buttons array.

Tracks can be individually muted and unmuted, and a special performance mode (called “Loopy”) enables you to touch any two gate steps and instantly create a performance that loops between those steps.

Track patterns can be cleared without clearing its playback parameters, and all track patterns (along with their individual playback and performance parameters) can be saved as a preset to one of eight internal memory slots.

Any hope that Steppy will be available somewhere in the planet sooner or later?
Eyeing the Steppy for over a few months now but dealers always extend the date with 2 to 3 months…

available from the b-stock section at the moment:

Here you’ll find some deals on new stock of discontinued or blemished products. Blemish products are tested to the same standards and hold the same warranty as any other products, but may have minor cosmetic blemishes. LIMITED QUANTITIES — OUT OF... 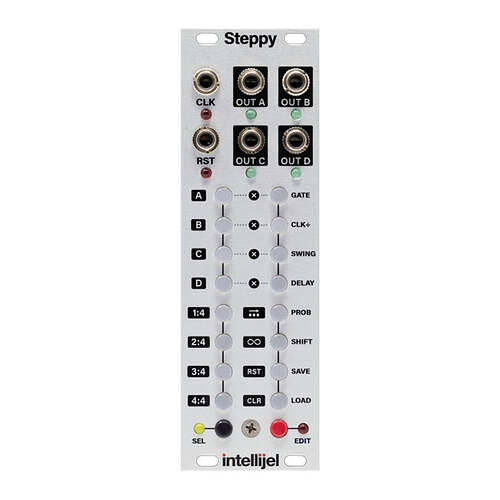 Steppy is a 4-track programmable gate sequencer with eight internal memory slots, external clocking, numerous tweakable parameters, and a performance-first design aesthetic. Tracks can be programmed by entering active steps on the grid or tapped in...