The rainmaker is a really awesome delay, but I’m wondering if Intellijel has considered doing a smaller/simpler delay unit like a bucket brigade delay? Thoughts?

Get it to 6hp and I’m in. Take over for Audio Damage (their delay is good plus small, but now out of production).

A 4 hp delay module wouldn’t be able to have very many jacks. Audio Damage didn’t have attenuators, but our designs generally include them on all CV inputs.

4hp maybe, but 6hp gives you a fair amount of room. Just gotta be clever. Look at some of the designs folks are coming up with now for micro-Mutable modules. It’s taken a generation or two, but they’re starting to make a fair amount of sense within a very small space.

Here’s a crack a a 6hp version: 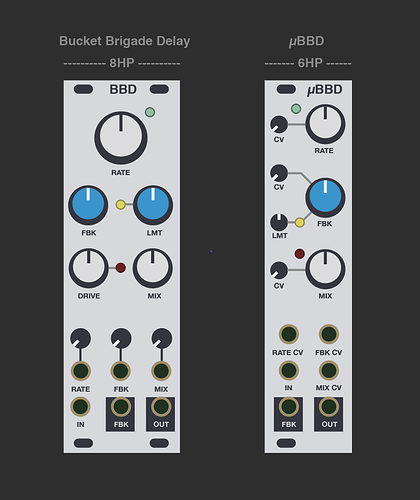 Nice work! Although personally I would prefer Send and Return instead of a Feedback out and Mix CV in.

That’s getting there. And as for the inevitable question “Why do you need stuff to be smaller,” I reply: Because I’m looking forward to Intellijel expanding the Metropolis to 16 steps, and will need the hp for that…

Here’s a version with send and return: 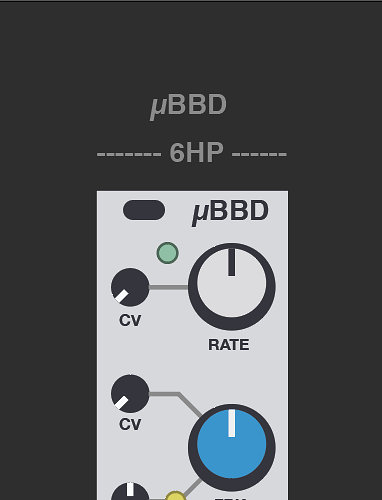 based on how big the Pittsburg BBD is, I wonder if there are some space constraints related to the BBD chips themselves

I’d be interested to know that as well. I own a Pittsburgh BBD and it is large, but they also use those large black and silver knobs, and I can’t help but think that takes up a lot of the hp available.

For the folks who are analog delay purists, I suppose only a BBD will do (unless you love tape delays and can get your hands on a Space Echo). Also, if you want to mess with self-oscillation, digital just doesn’t cut it IMHO.

The circuit board of the Ibanez mini analog delay pedal probably is similar in size to that of an 8-10hp module.

I’ve heard some good emulations (Strymon), but I would prefer an analog BBD or space echo myself as well, especially for the self-oscillation stuff.

Looking at the ibanez mini analog delay, I bet you could get it smaller if it didn’t have that big honking knob on it and it was initially designed for euro rack sizes

I get the sense that BBDs are wide because they were traditionally guitar effects pedals that you step on, and from what I’m reading parasitic capacitance can be a problem in BBDs so it makes sense to space things out, but I would think there’s probably a way you can design a circuit that is both small and sounds good.