I’m having a little issue with my (otherwise excellent) Rubicon 2. It seems that the TZFM input is DC coupled, so any slight DC offset in the modular signal results in a pitch change. This isn’t so much of an issue if the Index is constant (because I can just retune the oscillator), but it can sound pretty badly out of tune if the index varies (say with an AD envelope).

Firstly, am I really correct in thinking that the input is DC coupled? That doesn’t make much sense to me from a design standpoint; surely AC coupled would have been a better choice? (Or, even better, have an AC-DC coupling switch on the front panel). And if I am right, is there an easy mod to install a cap on the TZFM input?

Alternatively, I mainly use a Dixe II+ as the FM modulator. Is there a calibration routine for that oscillator that can remove the DC offset from its waveforms (and most particularly from the sine wave)?

It’s been a while that this question was posted, but I’m a bit surprised no-one has responded to this as this is actually a pretty good critique/question…

By self-modulating, you’ll speed up and slow down the positive and negative parts of the waveform differently, causing a frequency offset as the waveform spends more time in one part than the other, which on it’s part creats a dc-offset. If the input would be ac-coupled, this dc-offset would be automatically removed and the waveform should retain it’s original root frequency, no matter the modulation depth, something that is pretty important if you’re trying to play in a musical scale instead of percusive sounds.

An option to fix this is to use a dc-offset remover, which basically is just a simple 6dB highpass filter at a low frequency. It’s important here to not use a filter that has some non-linearities from itself as this can force it’s own dc-offset (the simple 2HP filter seems to not really work well for this, but my self creative passive highpass works a lot better) though resonance might be useful in some cases, in the end the simplest 6dB highpass filter using a capacitor and resistor worked best for me.

A nice idea is to put a distortion, fully rectifier waveshaper in the feedback path before the dc-offset-remover/highpass filter using a mixer/crossfader to mix between the original waveform and the distorted waveform. If you use the right highpass filter, any DC-offset should be removed and root-frequency should be kept at all modulation depths.

For cutoff frequency of this highpass filter, it’s nice to have a potentiometer for this as the phase-relations of the feedback modulation effect changes according to this cutoff frequency. Remember to add quite a bit of gain at very high cutoff frequency, as the output of the filter can get pretty attenuated, losing quite a bit of the range you can use to modulate your frequency.
Taken together with the above (rectifier+crossfader in feedback path), the sine itself can be smoothly morved between saw, triangle, pulse, square, peak while retaining it’s base frequency.

At least… that’s how it should work… when I do this digitally using code it works as expected, but when trying this with the rubicon, it doesn’t always “follow the rules”, probably/maybe because my self-made passive highpass filter doesn’t use an optimal resistor-capacitor pair, but I’m not sure of that.

I fixed it by making up one special cable with a decoupling capacitor in the barrel of the connector. Works fine!

And I addressed this problem with a DIY Rubicon Dongle™: 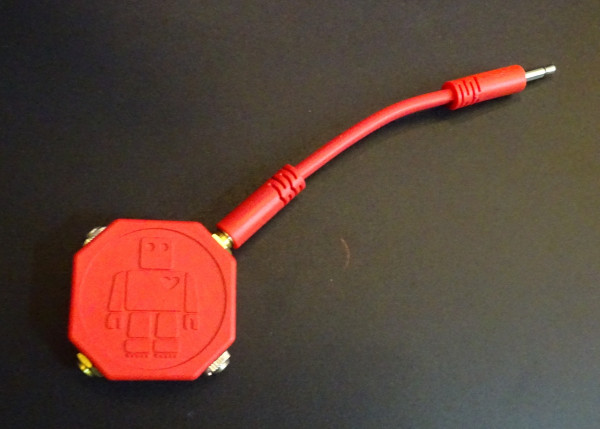 Specifically, I removed the board from this mult and replaced it with jacks and coupling caps of different values. It works great. (Don’t give me credit for this cool idea, it was Danjel’s suggestion.)