I have a Rubicon 2, which I really enjoy. But I’m also quite light sensitive and I often find myself averting my eyes from the two blue LEDs. I’ve sold a couple modules from another manufacturer for this reason but I’d like to hold onto the Rubicon. I know I could cover them with tape or Light Dims, etc. but I think that looks ugly and would prefer a more permanent solution.

So I’m considering replacing the blue LEDs with red ones. I’m handy enough with a soldering iron and through-hole parts. I recognize that this is risky and would void my warranty.

I’d like to hear tips or cautions from any users who have replaced LEDs on Intellijel products, or from Intellijel staff who might be willing to chime in (e.g. about the specs of the installed LEDs, their polarity, other considerations about the construction).

Looking inside, it seems like it would be a simple job: remove the nuts and knobs, carefully separate the ‘sandwich,’ desolder and replace the LEDs. (I considered doing the same with the other company’s modules, but their sandwiches appear to be epoxied together - annoying.) Am I missing anything? 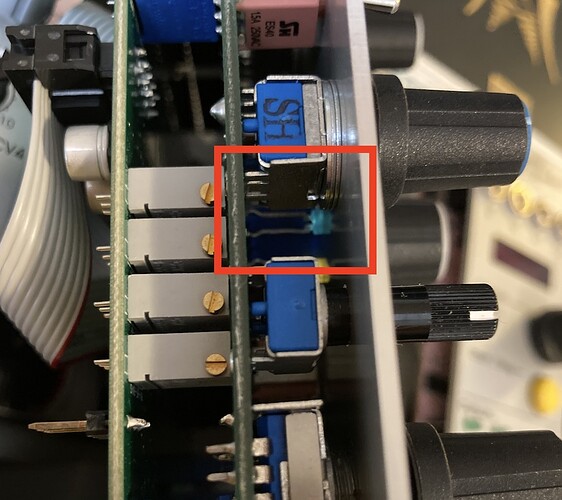 keep in mind that blue LEDs often require more energy than red or green ones (for a while, they weren’t even believed to be possible), so you’ll want to make sure to have a resistor or two in there as well. It probably wouldn’t make a difference, but it could cause your new red ones to be superbright and/or burn out much more quickly, which is something to keep in mind before you start. If someone (not me, but perhaps the @intellijellies could) was able to provide you with the exact type of LEDs used in the Rubicon, you could look up the specs.

Sorry I can’t be more helpful than that, but best of luck regardless!

Thanks, Steve. Yes, definitely planning on a resistor. Specs of the original LEDs would be very helpful, if available from Intellijel.

If you’re going that far, shouldn’t it be sufficient to add another resistor or replace the existing ones with a higher value in order to dim the current LED?

yes, that’s probably the better way to go. It should be possible to desolder one of the LED legs and then put a thru-hole resistor in line with it to lower the amount of current / brightness. This would be a fairly easily reversible mod, the resistor could later be desoldered and the leg of the LED soldered back in place.

This is a good suggestion. Thanks @polymute and @kamil. My preference is always red, but you’re right that dimming the existing LED may be simpler.

It might be a good idea to try and measure the voltage on the LED leads.
I believe that blue LEDs require something like 3 volts while most red ones are 2 volts or less.
A direct replacement would be very bright.
You will need to drop the voltage with resistors.

For a super simple “fix”, in the past i’ve carefully painted over blue LEDs on various devices with some acrylic paint. I can still see the light filtered through the paint, but some of the edge has been taken off of it. That said, probably not good advice for multiple reasons.

(side note: I absolutely LOVE how Metropolix has an LED dimming feature in the settings menu. I wish more modules / pedals / etc did this!)

I’ve done something similar, adding a really thick coat of glow-in-the-dark acrylic paint. It takes off the edge super well, but lets the light through, so you can still see what’s going on. The afterglow is super cool too

I’m intrigued by the quick-fix of painting over LEDs, so it’s great to hear people have had success with this. And good to see that some attention is being paid to this issue in newer designs. I’ve been baffled for years why some manufacturers in both modular and keyboards have made certain LEDs so blasted bright, particularly when an LED is tied to a fairly dynamic/flashing signal. I have a few euro and 5U modules that I could repurpose as runway lights for airports

Really it comes down to having the LEDs be visible in all sorts of different conditions. If they are dim they may not be visible in daylight and then it can be hard to tell what’s going on with the module. But then something that is clearly visible in daylight may be way too bright in a dimly lit room so there is definitely a balance to be struck there and it can be hard to get right. In a perfect world the brightness would always be adjustable but it’s not always easy to work into the circuit or there may not be space to provide trimming for LED brightness, especially on analog modules. On modules with a lot of LEDs, especially multicolour, we use PWM drivers and that has the side-effect of allowing for easy control of the overall brightness too…

Thanks for the insights. I can appreciate the challenge of trying to find a balance that works for every module in every potential usage situation, and big thanks to you designers doing creative things to find good solutions.

Across all my modules and keyboards, it’s only a few that are so bright they become distractions or make nearby text labels difficult to read. And these are a few years old, so maybe it’s a solved problem at point.

While I’m not generally a fan of 4MS modules, one thing I do love about them is how they always have a set screw to control LED brightness.

it’s 5am, have to work intensely on some projects, power on my studion and system (and coffee)… but rainmaker lights are giving me headache.
I had tape everywhere on it for a while. But it’s not convenient. If there’s no technical way to dim this with any update (I’m not an electronician but I guess it’s not possible) then some good advanced tutorial from intellijel on how to change all the leds would be appreciated !

The earliest batches of Rainmaker had quite bright leds for the tap section. We reduced the brightness by changing some resistor values on subsequent production runs. So the only way to dim the leds on your Rainmaker would be to change the resistors.
If you have a friend who is handy with a soldering iron, I could provide instructions on which resistors to try changing.

Yes that would be great please !
I cant debug or understand advance electronic but I did a lot of DIY and I am confident doing it if explanations and BOM are there (have quality soldering station good tools and magnifier)

Hi Danjel, is it still possible to get the instructions for dimming the LEDs on rainmaker? I’ve just picked one up and I’m very much enjoying it but I really do have to take these sunglasses off at some point!

Which PCB revision do you have?