So far I am loving the sound of Rainmaker’s comb filter section, and I have been studying how comb filtering works, but I still can’t quite make sense of this diagram from page 19 of the manual. Can someone please help explain? 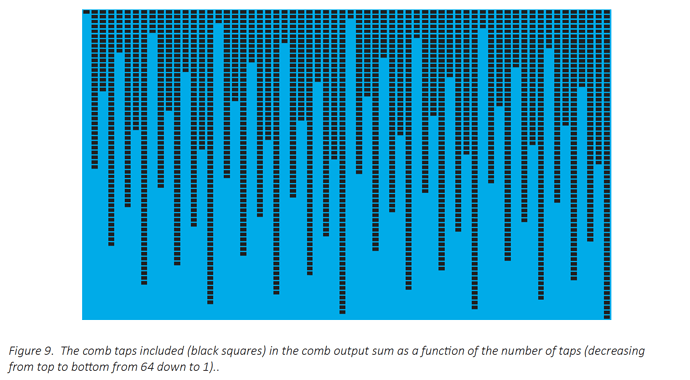 my interpretation is, the user selected value for the #taps parameter dictates which single row you are currently “on”. At the max (64) the row is all black cells bc we include left to right, all taps 1 through 64. The corresponding time duration (“SIZE”) and the pattern are independently set.

I also think of each cell in this diagram as one of the diamonds on the previous page’s diagram. Simply trimming taps off the end would truncate your pattern (for one thing). Instead, Rainmaker kind of reduces the density of the whole pattern by distributing the drops uniformly. So it does not remap the pattern in response to #taps changes. The 11th diamond (pattern step) is always the 11th tap whether it is dropped or not.

Ah yes, I get it now, thank you!!! I was confused because of the language “as a function of the number of taps”. That kind of locked me in a mindset where, in math, the vertical (y) axis would be a function of the horizontal (x) axis, i.e. the dependent and independent variables. So I was thinking number of taps was the x, not the y. Dunno why I didn’t consider it being backwards. Thanks again!