Portable power for 4U Palette

if you buy that Krisdonia battery, it has the right cable DC-DC included. No additional converter necessary.

Hey guys ,
Im new here and to modular…i have the 4u pallette and am in europe (uk) i use a uk to usa plug adaptor to connect my case.
What would be a suitable portable power supply that i can use…ive read this thread but im not sure if the suggestions would work with my setup? Cheers 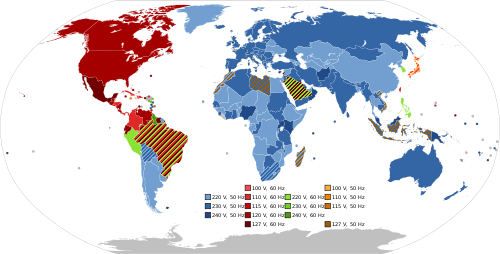 Mains electricity by country includes a list of countries and territories, with the plugs, voltages and frequencies they commonly use for providing electrical power to low voltage appliances, equipment, and lighting typically found in homes and offices. (For industrial machinery, see industrial and multiphase power plugs and sockets.) Some countries have more than one voltage available. For example, in North America most sockets are attached to a 120 V supply, but there is a 240 V supply availa...

The PSU included with the palette can do anything from 110-240V, and 50-60Hz. Assuming the UK’s mains electricity falls within that range, all you need to do is buy a new cord with a UK plug.

If the PSU were incompatible, you would need a voltage converter to use it, not just a plug adapter.

Hi Kena - Big thanks for this. I recently purchased a Krisdonia 25000mAh battery to run with my Palette after reading this thread and I couldn’t be more happy with it. I’m able to run an SQ-1 and a Qunexus at the same time as the Palette and no issues thus far. Just great. Thanks again!
Cheers.
M.

Hey! I’m thinking about getting that “Krisdonia” powerbank for my Palette case. Is it still working well for you guys?

Yes, it’s still serving me well! Might be newer/better alternatives out there today but this one I can vouch for.

Awesome! Thanks for answering

this one I can vouch for.

Are you running it on the 16v setting? Thanks

This one is the only one I can find with a physical DC output?

yep, 16V. It is indeed tricky finding ones with barrel-jack outputs

Great thanks - lucky we have this forum! I’m planning to use this case to focus some of the mini-systems and modules from my main case. First up will probably be Synchrodyne & expander (+random/sequencing + fx).

I ended up buying the Krisdonia 50000mAh power bank. It seems to work fine and is incredibly convenient. However, I did have an issue while using it recently. My ALM Mum M8 filter started acting up while using the power bank to power my 62 HP palette case, and I’m worried that the power bank isn’t safe for certain modules. Any thoughts?

Note that my +12V rating for my palette config is below half the max for the case, and the -12V is even less. I’m using the 16V setting.

A synth I have came with notes on usb battery pack usage. They said to buy the most basic pack possible with no on-board smart controls … The “smart” ones have overload and energy saving triggers that can shut down the power output. Whether or not that’s more harmful or annoying, in your case is hard to say. Maybe you’re getting some flickering during low load and the module you mentioned is most sensitive to this (?)

Did you try with and without pass-through charging? Obviously you might have something else at play, this is just one idea

Hey zilvar, I just created a new thread to make sure Intellijel saw my question, and I wanted to make sure you knew that I saw your reply here.

I just read a little about pass-through charging, and looked at the manual for my power bank. It says it does “manual pass-through charging”. In other words, you need to engage the unit to provide power if it is plugged in to the wall for charging. I have never used it this way.

A little worried about the Krisdonia bank at this point. The company doesn’t have a website, not sure how “legit” they are…

So I spoke with an audio friend of mine, an older guy who’s a PhD in electrical engineering. He basically said that the 16V DC from the Krisdonia should be ok. He also said over the life of the modules, powering the case with more power than it’s rated for might diminish the life of the modules to some extent (he was thinking more in terms of overpowering audio equipment like tube amplifiers)–anyone feel free to push back on this, I’m just a messenger here.

I then asked him if I should just go with a power station with an AC outlet and use the power brick the Intellijel cases come with instead of the Krisdonia, which doesn’t have a 15V DC setting. He confirmed that with that option, the power station will be less efficient because it’s providing AC to the power brick (as others have already said here and on Mod Wiggler). So all other things considered equal, the AC power station won’t power my equipment as long as a DC (battery/power bank) option with the same mAh rating.

He ultimately suggested I look for a power bank designed to output 15V DC. After searching a little I did find one: 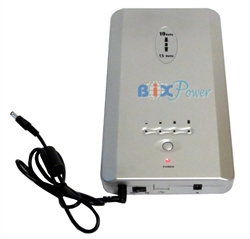 It’s more expensive but this company actually has a website (unlike Krisdonia), and they use Panasonic batteries, which my friend said are top of the line. I’m going to think about switching over to this unit from the Krisdonia just to play it safe.

Update: Going off a post from @ScottMFR above, I also found this, which also has a 15V setting. Cheaper but not available to ship to the US and only 20,000 mAh compared to the BiX bank’s 60,300 mAh: 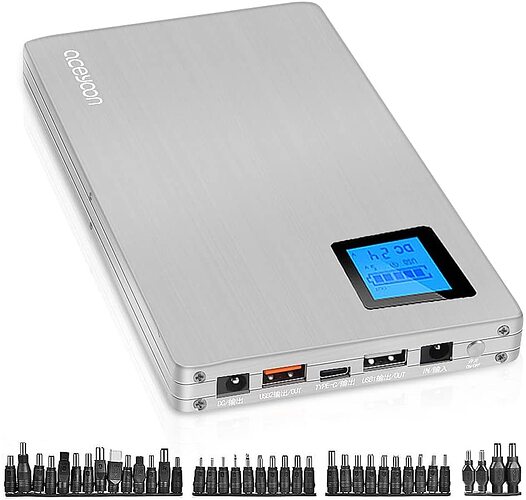 Like others have suggested, you could be running into trouble with the low-current cutoff in that supply. The specs claim it shouldn’t cut out until 100mA (1.6W power at 16V) but maybe if the Palette isn’t full?

Another thing to consider is noise: output filtering is one place where charger etc manufacturers can trade off performance for cost. For instance, these results for a dozen USB power adapters. They all output “5V” but some of them give you a bonus side-order of spikes…

So I spoke with an audio friend of mine, an older guy who’s a PhD in electrical engineering. He basically said that the 16V DC from the Krisdonia should be ok. He also said over the life of the modules, powering the case with more power than it’s rated for might diminish the life of the modules to some extent

Your modules will not see the additional voltage. The Eurorack power bus uses ±12V, not single-supply 15V, and so it cannot be directly connected to the power input jack. I’m not familiar with the Palette in particular, but as a general rule, cases have built-in power converters that supply the ±12V by converting down from, in this case, 15V.

If you supply too much voltage on the input, the risk is to the case power electronics, not to the modules (unless there is a catastrophic failure which connects input directly to output, but that would be bad even at 15V).

(I am not saying anything about whether 16V would be okay for the Palette in particular. It might well be, but I don’t have one, nor do I work for Intellijel.)

That makes a lot of sense. I was actually thinking that might be the case, where my friend who is unfamiliar with modular may not have understood just from our phone call. I read you loud and clear, thank you!

Maybe I shouldn’t fuss over this extra volt after all. It was just weird that I developed problems with both of my filters after I started using the Krisdonia…

I ended up going with an AC out option. We’ll see how less efficient it is compared to the DC out with the Krisdonia (this unit is rated a little higher, 57,600 mAh compared to 50,000).

I don’t understand this stuff 100% but I have been told that (chances are) the Krisdonia isn’t doing any kind of “power conditioning” i.e. filtering when it gives my case DC, and thus I understand that this is the purpose of the Meanwell brick, is that right? So I ultimately decided it’s best to stick with the Meanwell brick and use a power station with AC out. Fingers crossed that it’s not super inefficient! 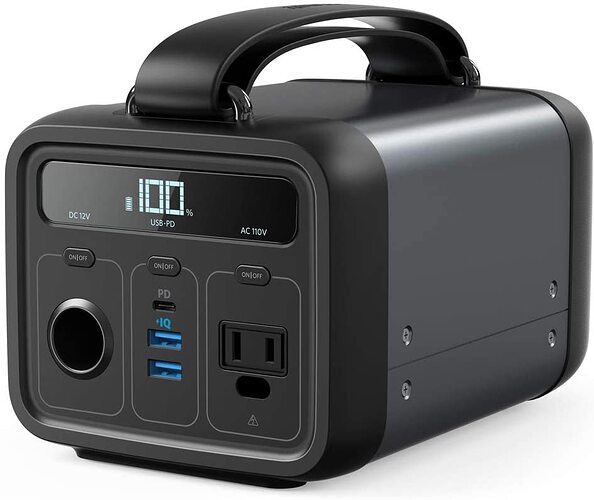 Ok I have another update:

So I bought the Anker PowerHouse 200. It was incredible. It was beautiful, nice electronic screen, and unbelievably powerful. I powered a full 7U 104 HP case with the AC outlet on it for 6.5 hours and it still had 17% power remaining. It’s not huge but it was pretty heavy.

Ultimately, I decided it was too much / too heavy for my remote recording needs and decided to check this out: 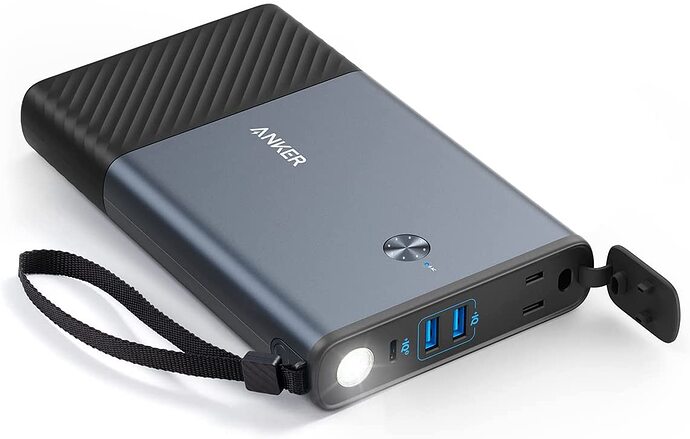 Half the power rating of the 200 (~27,000 mAh) but also has a pure sine wave AC outlet. When I got it, I tried it out with my 62 HP palette case and it powered it for about 4.5 hours with about 10% power remaining. It got pretty warm while it was working but not too hot, and it did have a fan that kicked on and made a small amount of noise. Not as impressive as the 200 but also much more portable–it also qualifies for carry-on airline travel being 100W. Ultimately, the PowerHouse 100 is not as powerful as the 50,000 mAh Krisdonia but I like having the peace of mind that I am not bypassig the case’s power brick. And Anker is an established, trusted brand, whereas Krisdonia doesn’t even have a website.