I’m trying to use the GX for velocity/accent trigger to WMD javelin accent input.
Would love to have a single gate output when any velocity level is reached (OR all the stages)
A dedicated velocity mode on the GX would be amazing.

A super-minimal microtuning possibility would just be to add a configurable “notes-per-octave” setting — code-wise this is just changing the note-to-freq routine from something like 440*pow(2, semitones/12) (i.e. 12 semitones per octave) to 440*pow(2, semitones/semitones_per_octave_setting). This would cover all Equal Temperaments (I’ve been all about the 19-TET lately!), so while it might not cover the full universe of microtuning I’d still have a great time with it : ) (oh, just seeing @jefferymac already suggested this, so seconding that with a bit more detail!)

Ability to randomize a given page or mod-lane (ALT + X) via gate/ CV input.
the gate could act as a one-shot randomizer, the trimmer pot could attenuate the amount of randomization.

Alternatively, allow a mod lane to actively re-randomize a separate mod lane/CV lane with the on/offs.

A step further could be using yet another mod lane to activate the slight random variation.
I often find myself reaching for the ALT+X buttons when I’m using the CV lane to control filter cutoff or sending mod lane CC to midi effects. The ability to modulate this great random features would be super SUPER!

How is the latency when sequencing midi this way? I found it always a little out of time when going into ableton and then back out to a hardware synth. Is it faster using the tubbutec bridge and going straight from there to the synth?

cant really provide much detail here as I’m using it without a computer on very loose ambient sounds with slow attacks.

Yes. The idea would be to use it without a computer.

Hello to all of you!

i have a request / question:

wouldn’t it be very useful if OFFSET could rotate your stages, to fit them to other drums etc, like:

the idea taken further (similar can be done on the HYPERSYNTH and is very cool) would be,
if the individual MOD LANES (ACCUMULATOR; RATCHET, etc ) could be rotated.

and last: it would be great, if there was a probability for more parameters, like the trigger count of ratchets, so it would not take external input for simple randomness like this

Talking about offsets, I’d like to pitch in a request for phasing the individual clocks when on MX-Expander > Mod Clocks. Is that even possible?

This isn’t exactly what you are asking for, but you can knock a Mod Clock (with a div greater than 1) out of phase by changing a Mod Lanes’ Clock Div parameter while Metropolix is running. You just toggle the value by turning the encoder to a different value then back to the divisor you want. Reset will lock them back in phase.

Thanks @reacpitch, yeah I was aware of this and it’s how I’ve been triggering single drums up to now. I meant It would be nice to be able to phase or shift those forward or backward depending on what you are building.

Yeah, that would be nice to have.

It’s neat that you were already using that technique. I only had a vague awareness of it and had to try it out/test it before posting my response above. I should try and incorporate it into some patches. So, thanks.

Shouldn’t it be possible to connect a Metropolix to a MIDI 1U with such a cable, so that I get more CV outputs from the Metropolix? And maybe even expand it with a CVx?
I tried using the linked pin diagram, but with no success. Am I thinking this wrong? 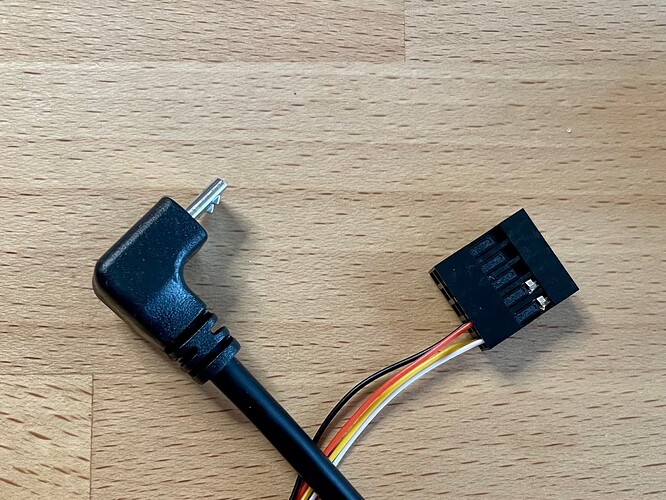 Sorry, this will not work. They are both USB devices (not hosts), you cannot connect them directly together, they need to be plugged into a host (aka computer, or other host device)

Ah yes, of course! m)
Thanks a lot, I should have known.

Does the Metropolix support USB OTG, so that I could build a Host out of an adafruit Trinket, I have lying around? It could translate the signal to DIN MIDI for the MIDI 1U, then.
Thanks a lot for your answers!

Yeah it can be connected to any usb-host that accepts USB MIDI.

If you have a Raspberry Pi kicking around you can build a USB MIDI Host/Router. It’s as simple as flashing the image to an SD card: https://neuma.studio/rpi-as-midi-host.html

I’ve been using the above for quite some time with a plethora of devices. It’s bomber solid