Hi, I’m new here. I’ve searched the forum but haven’t found any previous posts on this.

I have an idea for a Metropolis feature that I think would be musically interesting: pedal note mode. In this mode, if a stage is set to a pulse count of more than one, and gate mode is set to repeat, the repeated notes (i.e., the notes following the first pulse of that stage) are played at the root pitch.

Metropolis’ standout feature for me is how much mileage it gets out of just eight stages, and this mode would only enhance that. You could, for instance, play:
G C C F C C E C D C C C C C C C (← click!)
… using only four stages, whereas it would currently require eight (to fill in all those Cs).

Melody notes separated by repeated pedal notes are a common musical technique (think Bach’s Toccata and Fugue in D minor, or AC/DC’s Thunderstruck). I would find this enormously useful.

The setting could live under the STEP/DIV button, with the STEP1…4 value duplicated to STEP1p, STEP2p etc. (i.e., same effect but in pedal note mode).

Since Metropolis is a few years old now, are new features still on the table or is the module unlikely to receive any further updates? I’m totally happy with the way it works now, but if at all possible, the pedal notes thing would be a great extra.

I actually like this idea. My musical training is quite sparse, but my mentor was explaining pedal notes to me and demonstrating on an 88 key electric piano. I grasped it immediately. Your suggestions for implementation and how it could be integrated into the existing user interface make a lot of sense to me.
I’m going to keep my fingers crossed.

Many folks consider the Metropolis to be one of the most solid sequencers in Eurorack. I own two of them and hope that development and enhancements like this one continue.

Really cool idea, would you implement this mode per stage or for the whole module?

Thanks, that’s great to hear!

Really cool idea, would you implement this mode per stage or for the whole module?

I think to keep the interface simple, it would be best to implement it as a global setting rather than individually for each stage. Just like the STEP/DIV setting (of which it could be part, like I suggested in the first post) is global for all stages as well.

Of course, if there’s a user-friendly way to implement it per stage that I haven’t thought of (kind of like the way ratcheting is implemented, maybe?), that would make it even more powerful.

So the way I imagine it, the STEP/DIV knob would gain four new settings, in addition to STEP1-4, making it eight in total. That number works well with the Metropolis’ interface, especially for shortcut keys (hold button and press SLIDE/SKIP 1-8).

With those settings, a single 8-pulse stage with root = C and slider at G could do the following rhythms
( . = rest/gate off): 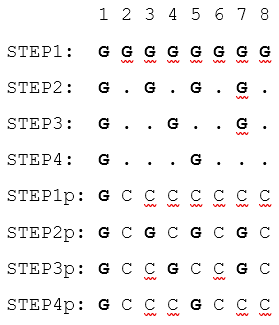 (Yes, I accidentally included the red squiggly spell check lines from Word in my screenshot

Then there’s the question which root note to pick (i.e., which octave). I guess the lowest one within the range of the sliders, or the one just below that range?