I’m really hoping for an Intellijel sampler one day so I threw together a quick concept for fun. I tried to take some notes from an earlier poll, some design cues from newer modules (Steppy/Tête LED buttons) and came up with this (~14HP): 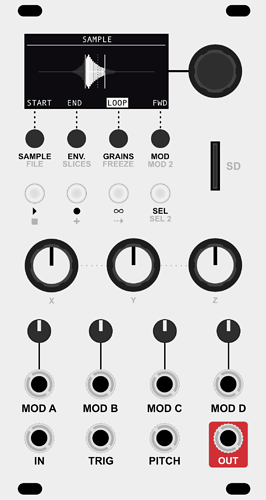 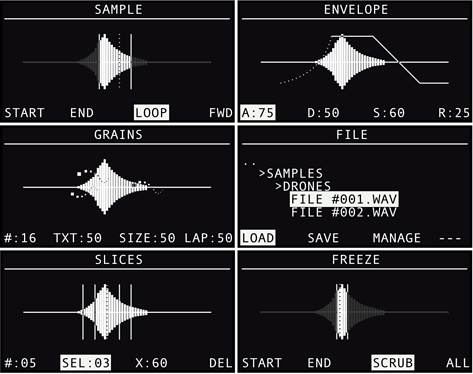 It doesn’t have multiple rotary encoders (which was a popular feature in the poll), but it has four buttons that can quickly edit functions from within the current page while using the rotary encoder. When using Erica Synths’ Sample Drum, I easily became confused with its six encoders. I think this would resolve that issue.

Also, the four modulation inputs would ideally be able to modulate any parameter that you could edit with the button + rotary encoder combination.

Looks nice! Are those transport buttons between the function buttons and attenuverters?

Personally I’d like to have at least one, preferably two MOD knobs like you have on Plonk.

I suppose with some redesign then two dedicated MOD knobs could be placed on the panel. With nothing patched to the input of MOD A-D then perhaps all of the attenuverters could be dedicated MOD knobs programmable through the MOD page, but I know the smaller form factor isn’t the same feel as full-size encoders.

I’m not sure you need quite so many buttons. For instance, Stop could be achieved by pressing play, couldn’t it?

I like the idea of having buttons that correspond to functions on the screen, but maybe long pressing those could access the Sample/Env/Grains/Mod menus?

I like the idea of having buttons that correspond to functions on the screen, but maybe long pressing those could access the Sample/Env/Grains/Mod menus?

That’s a good idea! I’ll see what I can change when I get back home.

I’ve updated the concept with three dedicated modulation knobs that could be set from within SEL 2 + MOD 2 page. I’m not sure if any of this could realistically fit or not. I try to size everything accurately based on Intellijel’s modules with my canvas sized to 133.3mm (1U), but I don’t know how crowded the back of the panel becomes from various components.

Nice! Yeah I’m liking the look of that now.

Also, since I can imagine the inputs being assigned to various parameters (both clock related, triggers and modulation), they could just be ABCD.

The select button could also maybe be replaced with a trigger button similar to Plonk for manually triggering the sample/loop, since pressing the encoder could perform select functions (unless there’s something I’m missing.

I had envisioned the SEL + SAMPLE/ENV/GRAINS/MOD would open the labeled page, and holding one of black buttons and turning the encoder would set the value. This would allow for faster editing than having to turn the encoder and select the functions to edit then turning it again to set the value. I suppose it could be done with long presses, but I wasn’t sure if it’d become complicated with each black button having three functions (e.g. selecting page 1, page 2, and editing the selected parameter).

I know you all would make it your own when, and if, it came time to design a sampler, but I hope it could be of some inspiration at the very least.

I think having some additional outputs could be useful. Like a configurable output that could switch between a gate output when the sample is finished playing, a ramp CV that increases in amplitude based on sample position in time, or an envelope follower that reacts to the sample’s amplitude.

I think it would be cool to use the existing 12HP Plonk architecture/setup as a possible sample playback module to save on fab/R&D cost - maybe alternative firmware for existing Plonk users? (One can dream…)

ok when do we get this

I think it would be very nice if one could trigger the sampling with gates live…that would open a lot of possibilities. If this already is intended, great!
I hope this module will become reality. I think samplers and FX is what we need more of by intellijel.

I’m curious of how many of these sketches from users become real modules, and if you guys have any kind of policy on outside design.

All of our designs are done in house, we have our own philosophies and priorities. There is not really a policy for unsolicited designs :). It’s always interesting to see what others come up with, actual products or not.