So, I always end up getting modules that aren’t exactly what I thought I was going to get next. I’ve had my eye on the Dixie II+ for a VCO with hard and soft sync, as well as the Bifold. But instead I ended up getting a Quadrax with the expander and then Scales. I also added the Stereo In to my 104 4U case and it’s been a huge addition. I realize now that I really need another Mixup. They don’t seem to be available at the moment. Are you expecting any new batches of the Mixup? Thanks and keep up the great work.

How are you using the Quadrax Expander?

Nightlife in Canada has the Mixup in stock right now: 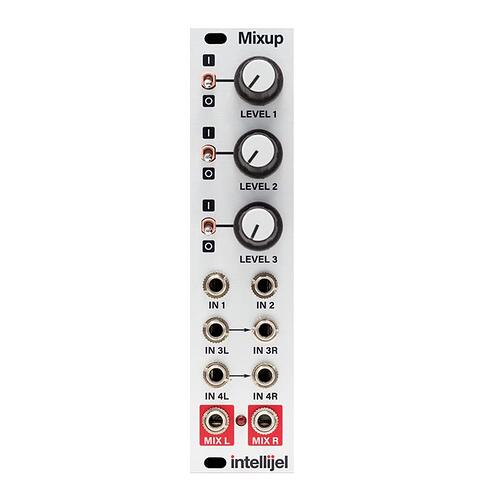 Mixup is a versatile, expandable audio mixer for eurorack format. It has eight inputs (6 on the front panel) and two outputs. Inputs 1 and 2 are single-channel mono inputs, each with its own mute switch and level control; Input 3 is a dual-channel...

Good question. I’ve only had the Quadrax for a couple weeks (and the expander for only a few days now) and I still haven’t even broken out the manual for it yet. I’ve just been working intuitively with it to get the feel before I dive into the manual and actually figure everything out. It’s just the way I like to work in general, I think from being a musician and picking up an instrument and figuring as much as I can out on my own. For some reason this gives me a better feel for the instrument. There is much I do not yet understand about the Quadrax. I’ve put the manual up on screen a couple times with the intention of diving into it and then I end up making music instead lol. With the expander I’ve been mostly using the end of fall outs to trigger other sounds in my patch or to reset a sequence for instance. I have a Contour 1 on the way so I plan on using the 2 together in patches with the help of the QX expander. The expander has added a lot of rhythmic spice to patches. If you don’t have one and are considering it I definitely recommend it, particularly if you are fond of the Quadrax

Looks like we should be getting more Mixup by the end of February.