Do I need headphones module in palette?

If I’d have Mixup connected to Palette circuit, do I still need Headphones module, or I can connect them to the Palette’s jacks?

How do I make them balanced? i just put everything in place and only left headphone is making something

The Mixup makes the output jacks unbalanced, not balanced:

To Connect the Mixup to a 2nd Generation Audio Jacks board:

It varies from device to device in Intellijel’s current lineup - e.g. the Stereo Line Out 1U sends balanced signal to the jacks, and the Stereo Mixer 1U sends unbalanced. It’s confusing.

Ah, ok. I somehow thought when you send anything to balanced jacks, it’ll be balanced

The discovery is not a dead end for your original question. Since your headphone jack fits directly into the Palette, they’re likely wired for UNbalanced stereo TRS. So the thing to solve is getting sound to both ears, not achieving a balanced signal. And ideally you want a Left and a Right, not Left in both ears that you’d get if you connected unbalanced headphones to a balanced Left signal via Stereo Line Out 1u .

You described getting one channel in one ear. The other channel (e.g. Right) signal is supplied at the second jack, so if you don’t have space or can’t source a Headphones 1u, some clever wiring to combine the two channels into a single female adaptor could potentially give you a stereo signal that is ultimately better for unblanced-wired headphones than the super loud split-mono scenario if the jacks were indeed balanced-only and not hybrid.

I don’t actually need separate left and right channel. Everything I have in the case is mono, so having one channel in both ears barely an inconvenience. Actually that’s how I originally thought the balanced jacks on Palette work.

Yeah, I’ll probably start looking for some “joiner” jacks with female on the other end and wait for 1U Headphones to get restocked. It just feels wrong to buy another jacks, when I have a case which has big advantage of having jacks built-in.

I just quickly checked the manual for Headphones 1U. 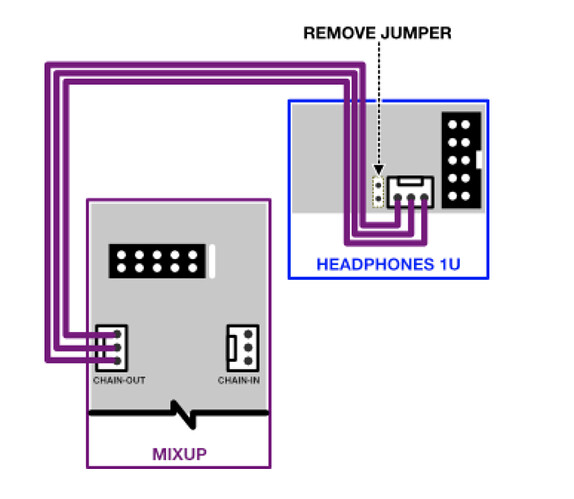