Hello to all the community

i am new in the forum, and sorry to start with a stupid question

I have two plonk recently buy a second hand one, my surprise was when I set it up in my case, is white? why this is like 2 different display colors? there is some way to change color? I have one blue and one is white !!!

thanks in advance for answering
I appreciate
All the Best

Maybe a parts sourcing issue? It isn’t uncommon in manufacturing to replace a part with something slightly different. Personally, I think it’s cool to have two otherwise identical modules with different color displays.

I’ve never seen a plonk with a blue display; as far as I know they’re all white. However, it originally did come with a protective film over the screen, and those can be tinted blue to let you know they’re there. 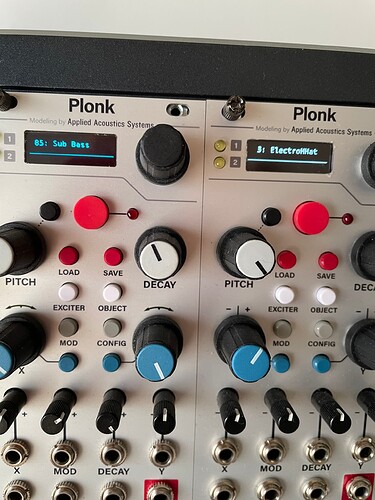 The markings over top of the blue knobs are also different. One has bi-directional arrows and the other has the -/+ markings.

I have exactly the same thing! I have bought two second hand this week and one is white and one is blue. The neat in me finds it really off putting.

Are they just from different eras/manufacturing runs?

So, I bought my first Plonk new in 2019 (if memory serves). It has the blue screen and the arrow indicators above the X/Y controls. Then, in 2021 I bought two more. They are white displays with the updated panel. So yes, the blue are the older models, white is a more recent run. Not sure when the changeover happened, but I was surprised by it as well. Kinda wish I could update my original to match the new ones as I prefer the white display.

That’d be a parts shift. Parts of all kinds are hard to come by, so it’s likely Daniel switched to a functionally identical (but different colored) display at some point due to shortages.

Actually, OLED screens are one of the few things we have not run into shortages of (yet!).

The original Plonk and Zeroscope had blue oled displays but at some point we decided we wanted to try and unify all our display-based products to have the same color.

So Plonk, Zeroscope, Tete and Metropolix all use a white display and we would try to do the same for any future products. The only odd one out is the Rainmaker in yellow since there are no white option in that particular size.

Really?! Interesting. I know TE blamed their OP-1 price hike entirely on OLED shortages, but I guess that’s not a segmented monochrome display.