Hey guys! Here I am with another concept for a new module. Only this time, it isn’t necessarily to fix a problem that might not exist. I love using the planar2+ in polar mode, and taking the xy outs in bipolar mode. Lots of fun. But I have this theoretical patch that involves like six of these chained up together, with buffered multiples in between. Ends up making some chaotic madness, but sounds ** usually ** pretty great when sped up to audio rates. I sketched out a module that would be very simple (just two inputs and a lot of outputs) that could be done in theoretically 8-10 HP.

On the first row, there are two inputs, the cv 1 and 2 on the planar. Then there is a thru output (basically a buff mult of the inputs). After that, there are two pairs of outputs. The first is like the XY output on the Planar. The second is what that XY output would be if you swapped the two cv’s (radius and angle).

On the next row, it internally routes a buffered signal from the first output pair, and treats it like this was now the two inputs. Again, two pairs of XY outs. The other half of this row does the same thing with the second XY outputs, to again provide two pairs of outputs after a polar conversion.

On the next two rows, it does this once more for each of the previous four pairs of outputs with eight outputs here (sorry for such a bad sketch but here it is!) 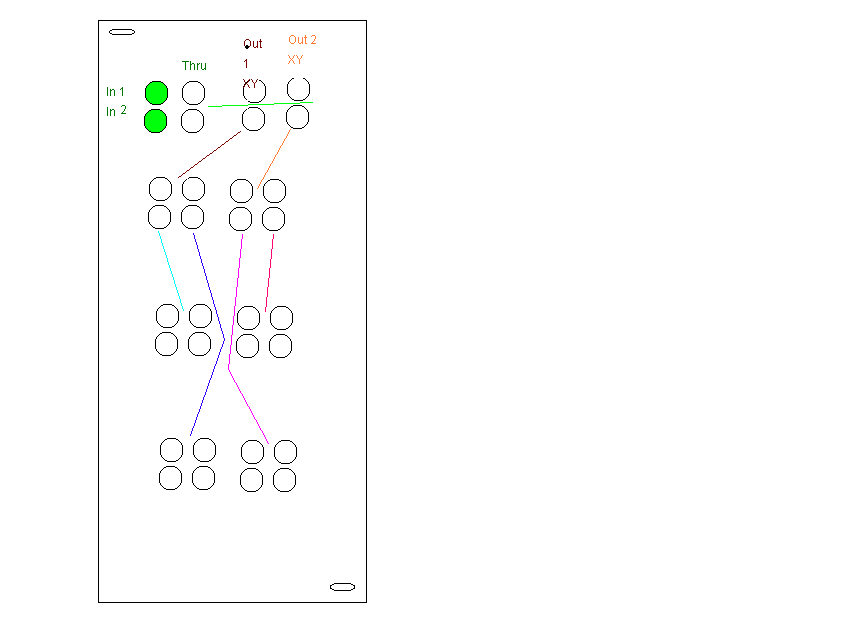 So now the question: 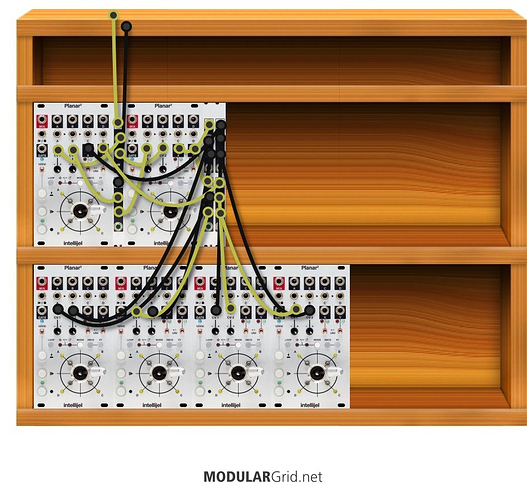 image.jpg934×886 239 KB
all cv inputs are set to polar mode.
works great with audio. Patch two simple oscillators in, take all of the outputs and send to a mixer, and you get instant polyphony. it’s amazing. I think. I haven’t actually tried it yet because you can see how much of my intellijel 84hp rack this would theoretically take up.
It would also be expensive. But I would love to see a simple module that can do this by itself, in maybe the same amount of space as one planar and a buff mult. Is that too much to ask?

If anybody has any planar’s lying around, please feel free to try constructing this patch (or even only use a couple) and reply with how the audio sounds before and after please?

So the two vertical cables are the inputs. They are normalled to 5V, although you can switch it to 10V using a jumper on the back. this normalling is important because you can use the two attenuverters to control everything.
Next are the two blank outputs of the buffered multiple—they do what they say. Just a through for the inputs, outputting an unmodified input signal.

Then it would internally do what the first planar is doing, a live polar-to-cartesian conversion. This can take triangle or saw waves and output two sines with some harmonics. This output is the the second buff mult. (XY pair) This is exactly what a planar in polar mode does. But the next part is where it gets interesting.

The last pair of jacks on the top row does the same thing, internally doing a polar conversion. However, this uses the second planar in the patch. You will notice that the two cv inputs swap. Thus, a completely different set of waveforms. These output an XY pair from the third buff mult on the top row.

This is where it gets chaotic. Each of those outputs is internally buff multed, and the process is repeated. The XY position becomes the radius and angle. These output XY pairs which would be taken from the planar xy outs on the bottom row. This totals to 30 outputs.

Edit: In the diagram below, the through outputs are replaced with attenuverters.

So I used some basic picture splicing to show sort of what it would actually look like:

I hope to use some sample oscilloscopes to show exactly how this works but it could take me quite a while.

So it’s a planar2 in polar mode, but going into another?

This sounds like an interesting concept but please explain it better. The patch is busy but helps a little.

@squire80513 it would be a bit bigger and I love the compact design, but would there be indicator LEDs line in the planar?

Totally! that would be easy to do. I was just not feeling like cropping any more images at the time. It would bring it up to about 24 HP

I have created an interactive graph to show what I mean. The movable point is the input also used on the planar2. The set of points (a,b) would be the normal XY output for the planar 2 in polar mode. I hope this helps explain the concept. @squire80513 and I have been working on this graph and this module concept a lot over the last few weeks. That’s why no posts from either of us. Enjoy and I hope this helps the idea make sense!

Oh also this may have not been obvious before but there is no joystick recording or abcd quad section. This is just for the cv section. But it can process audio nicely!

Thanks Steve! Graph is helpful. I suddenly realize what the rest of the forum has seen all along: this module appears super complicated.

Ok. It’s really not. It just does a simple mathematical formula, same as the planar 2 uses in polar mode, just over and over again. Think of it like a cv Spirograph.

Also: the name kinda is vague and sucks. It’s not intellijel-ey at all. Any suggestions?

just call it the cv spirograph or some similar no-copyright version of the name. I have a patch on vcv rack that can approximate this module, and it has taken me a few months of work. but it’s ugly and doesn’t work well. my poor little laptop’s processor really messes up the audio. as you can see from the graph, each tier of hierarchy speeds up the audio frequency. I find that it works well for turning two almost audio rate LFOs or low audio rates into like a bassline sort of feel. if this module ever becomes a real deal, it processes higher frequency audio and more complicated waveforms like a real nice distortion, which may or may not be desirable, depending on the user. There aren’t many good dirty distortions available in the Eurorack world. I don’t know if it was distorting because of my poor little laptop’s processor or whether it would do that in real life.
@squire80513 let us all know if you ever can get a hardware version out! Love what you’re doing!