I can’t see myself ever moving my rack off my podium that I constructed to have every knob exactly at my fingertips, the Push2 is just a turn to the right and is exactly centered to my eyes at the perfect angle and height. I used angle cut finished 4x4s and plywood. My next case will mostly likely be a 104x7u black Intellijel. I would like to suggest adding VESA mounts to the back (like the ones on your TV). 3-6 sets even better to allow for offset positions from your mounting bracket/arm but I understand this would add cost. A case lid would just be something I have to store, so maybe it could be made a separate purchase? 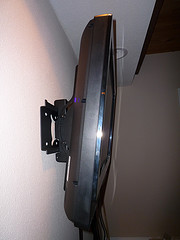 The Flat Display Mounting Interface (FDMI), also known as VESA Mounting Interface Standard (MIS) or colloquially as VESA mount, is a family of standards defined by the Video Electronics Standards Association for mounting flat panel monitors, televisions, and other displays to stands or wall mounts. It is implemented on most modern flat-panel monitors and televisions. As well as being used for mounting monitors, the standards can be used to attach a small PC to the mount or function as a monitor...

You could get a VESA mounting bracket and drill the case for holes in order to attach the bracket, it should not be a difficult modification. It’s pretty unlikely that we’d them to production cases since it’s not a common request.

VESA. Articulating arm or wall mount. What a cool idea.

I think all Eurorack cases should have VESA mounting holes on them. A lot of pro music equipment does, why not Eurorack.