I was looking at purchasing 3 x TPS80W power bus boards for a DIY case, giving me plenty of juice. (9A ± 12V), originally with 3 power bricks.

Although, there is a lot of juice, its only 60 headers. I’ve looked around for other options that provide the ability for multiple bus boards on a single PSU, however the -12V rail isn’t as juicy. Find most of them lacking in that department in comparison to the TPS80W.

2 x TPS80W still gives me 6A on the ±12V rails, which is still enough for my case requirements.

So I’m wondering if its possible to purchase only 2 TPS80W bus boards with 1 power brick and attach additional 3rd party bus boards (giving me more headers), provided I stay within the specs of 6A?

OR… would it be more suitable to get TPS30 MAX x 4 (6A) which gives me the same spec of the TPS80W x 2 (6A) but with 80 headers. With this option, would I need two power bricks or could these be chained?

Anyone done this? Recommendations?

I ran into a similar issue when building my first custom case. A TPS80WMAX was plenty of power, but not enough headers so I was gong to buy two. Danjel suggested doing two TPS30WMAX boards in series instead. Still plenty of power and twice as many headers (and still only one adapter and power entry which was a big plus). I imagine you could do something similar. 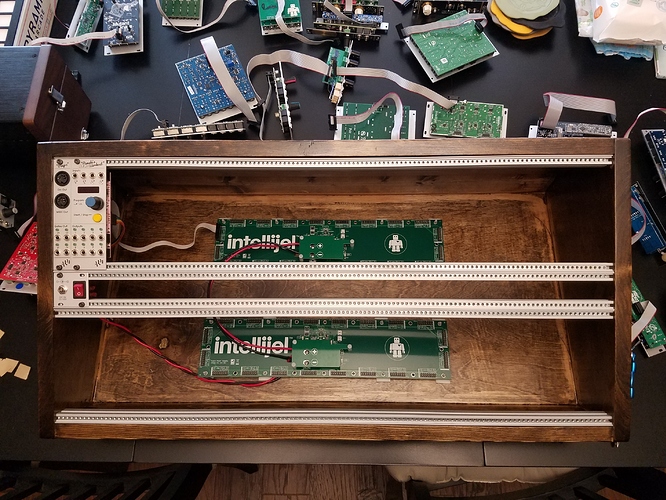 Which power brick did you use to power both bus boards?

As my case would be larger than yours, I’m wondering how many Intellijel TPS30MAX bus boards can be daisy chained per power brick?

Could I use the 90W power brick to run 4 TPS30MAX bus boards?

It’s right there in the numbers

The 30 in the TPS30 refers to 30W maximum consumption. So if you are maxing them out (not recommended) then you could use 3 with the 90W power brick (not recommended to max that out either). If you stay within about 80% of the consumption of each board then you could run 3 off a single power brick. Two 90W bricks could easily power 4 boards though. That’s the setup I used to have on a 12U goike case.

You’re very welcome. As you can guess from Kamil’s response, I use a 90W brick for my two 30W boards. Any noise and power issues I had before disappeared when I upgraded to Intellijel boards. Can’t recommend them enough. Installation is super easy with the PCB standoffs too. I bought these:
https://www.mouser.com/ProductDetail/Hammond-Manufacturing/1421PCB1-8?qs=9GX7soZQXxEMpdz%2Fw8nlFg%3D%3D

I reached out to the guys at 2Egress for some advice on using multiple boards, here’s what they passed on:

We use Acopian PSU’s for larger format cases for power.

For smaller format cases we use the Meanwells as you noted. We limit them to four or less Intellijel boards as a rule and it hasn’t failed yet.

The secret to it all is just math. Add up what amperage is for everything and look for the way to make it never run out of juice.