Just got a performance case but can’t find the 1U buff mult in stock anywhere (UK/Europe). A smaller version would be ideal, but it’s not one of the options in the poll thread. Was wondering if anything new was coming?

Transient Modules makes one that has one fewer output per mult, and is 12HP.

Thanks, I’ll check it out!

1u ADSR would be really cool

Just found myself wanting a XLR mic input. Looked up what was avail currently in the modular world and figured I’d mention it here. I know this was in the thread previously but wanted to see what people’s interest in a 1U version was like current day. Cheers!

Just for regular dynamic mics or with phantom power?

Ideally with the option to turn on phantom power. Thinking of the possibility to add a “room mic/overheads” and yeah phantom power would be pretty essential.

I’d be interested in a mini clock generator with a screen that can do exact tempos. Just the core functionality of Pamela’s workout or Make Noise Tempi. You could call it Intellijel’s Interval Training. Wouldn’t even need clock dividers since Shakmat has a 1U clock divider out.

I just noticed After Later Audio makes a 1U buffered mult as well. They typo’d on the width, so I don’t know how wide it really is, but it looks like 10HP. 3 outputs per channel, like the Transient Modules mult, but the panel is black and gold PCB instead of aluminum.

The desire to fill 4HP, combined with the current lack of inventory in stores, got me thinking: I think a series of 2-4HP 1U modules would be helpful. I’m not an EE, so I have no idea what the PCB situation would be like for any of these ideas in such a small space, but based on how many things can fit on a 2HP or 4HP panel, here are some ideas (some of which were mentioned previously, by myself or others):

Or perhaps the 4HP ideas would work better in 6HP, so things can be a little further apart.

4HP is a common gap size, but it’s quite small to do much. I think even having 4 jacks is a stretch and I’m not sure if it’s big enough to accommodate a full sized knob, so a mini pot or a switch would be the way to go. Then if you want LED indicators for any of the functions that takes up more real-estate so pretty quickly things grow to 6HP.

That being said, I can see the possibility for a few handy utilities in small footprints. A 3:1 unity mixer could maybe be done in 4HP? A single input/output inverter might work in 2HP? Maybe a simple toggle triggered by a button or a gate input?

A 4HP Inverter yes yes would be excellent. One in and one out.

My thought was, every 2HP can accommodate two things vertically - some combination of jacks, mini pots, and LEDs (more than two things if they’re all LEDs). It’s a tight horizontal fit to have something every 2HP, but of course it’s possible - there’s a company whose entire existence is based on that fact - so 4 jacks in 4HP is possible. I didn’t think about having LEDs except for the power indicator, although several of those ideas could use an LED.

I realize extreme hardware density and reliance on mini pots go against Intellijel’s design language, but there’s nothing available to fill such small gaps except the 2HP blank and the currently-sold-out-everywhere USB Power 1U. It would be great to have a variety of useful options when trying to fill a small gap.

I like your ideas. I’m not sure how much use I personally would get out of them (a lack of experience and/or imagination on my part), but I’m sure there are others who would find them useful.

Glad one of the 6u things has come out now. Pity it was an LPG. I have so many vcas I just need utilitys really. I hope next 6u is an LFO.

Also I would love (in any size) a cv recorder. Would work perfectly with the FSR.

If you’re after a 6HP LFO, you might want to check out the Non-Linear Circuits Sloth. It’s available in Intellijel format either assembled or DIY in 3 speed options: Torpor (15-20 second orbits), Apathy (1-3 minute orbits) and Inertia (15-20 minute orbits). 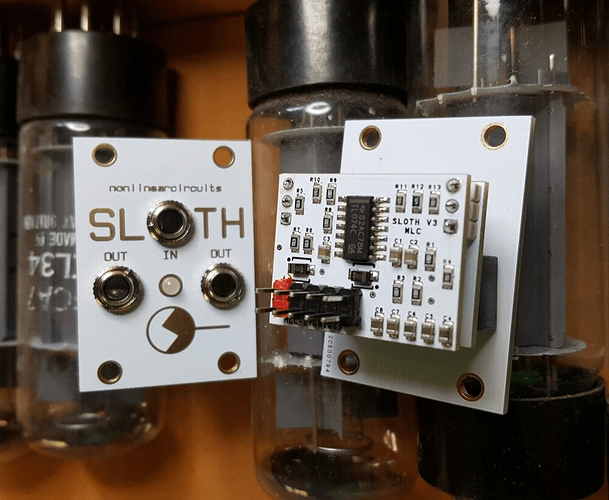 Description/Usage 6hp These are Sloth chaos modules available in 1U 6HP panels. The panels are available in Pulp and Intellijel formats, please specify when ordering. Please note, the PCBs only have eurorack 10 pin power connectors, not the Pulp...

I agree that a CV recorder would be a great 1U addition!

Just to add another vote for a USB audio interface. In my case the minimum requirement would be 4-channel out. I don’t need all the options of an ES-8, but getting more channels into the DAW utilising the existing USB port on the case (or even on the front panel) would be cool.

Getting 4 channels out via two of the existing 1u output tiles requires a fair amount of 1U space, a lot of 1/4" cable patching when you set up along with the cost of upgrading my existing audio interface. A dedicated USB audio module would be a nice solution for this.

I’ve explored the idea of doing a USB audio interface and also used an Expert Sleepers for that purpose. It seems like a good idea on paper but has quite a few practical limitations. For example if you have an existing interface then you can’t really use them both at once unless you do a composite device on macOS or… I’m not even sure what on Windows, ASIO4ALL I guess? In any case it’s a bit of a hack and has always lead to glitches and issues for me. The other thing is that developing a USB audio interface is actually not that easy if you want to get good audio quality. There’s lots of technical issues with USB clocking / sample rate sync to deal with. So I kind of feel like it would be a lot of development effort for something that’s probably not going to be hugely popular and also kind of boring to work on

Maybe an ADAT or SPDIF converter would make more sense?

Thanks for the reply, makes sense. I guess for my use case I’d try and avoid having to aggregate inputs with another interface and probably use the existing interface for output only. But yeah I can see that might be a niche product.

ADAT might be an option though there seems to be a lack of affordable interfaces with ADAT in so the total cost if you don’t already have one ends up being towards that of an ES-8.

If we ever come up with something that seems like a workable solution to the problem we will surely do it, but I think for now the best bet is to invest in a larger audio interface or other kind of recording device.

I know @slowwild has had good results with running Eurorack directly into a Zoom L12 which works great as a mixer, standalone recorder, and audio interface.