Has the idea of a multiplier and mixer combination been discussed as a 1U tile? It would be a nice option for those who need to consolidate space but would like to have both. 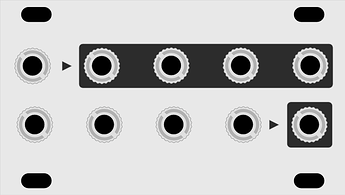 It definitely would not be 2hp but it would be really cool. If I put all of my Intellijel 1u modules together (I have one or two of each) there are definitely a lot of unused jacks. It would definitely be cool to do something like that where I could just assign what and how much of it I needed. Re-assigning would be a pain though. Sometimes it’s nice to just have that extra buff mult out. You won’t think you’ll ever need it, but who knows how it could come in handy?

I would love this design but it would be limiting. But I need something of this concept! Great idea thanks!

Also idk for certain but it might be possible to use a passive mult also as a passive mixer. Don’t quote me on that. And don’t try it unless you’re willing to face the fact that it could break the mult. Not certain at all on this one. But maybe